In the land of the small, the big figure is king. In this case, King Booker to be exact. Yes, yes I know, technically speaking this figure predates the King Booker gimmick, but still, that’s a clever opening line. I think so anyway. 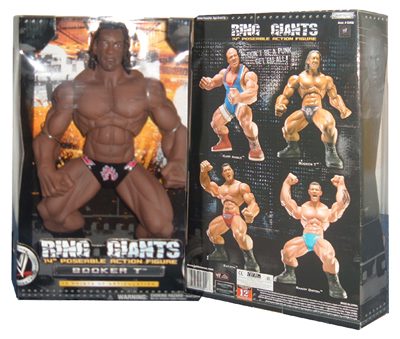 Getting onto the actual business of reviewing this figure, first impression? MAN, that’s a BIG figure! And it’s in a BIG box! Of all the figures I’ve collected, I’ve never seen anything this size. It says 14” tall on the packaging, and it means it.

And the packaging is something else too. Rather than the usual plastic fronted bubble stuck to a backing card, Booker arrived in a very nice box, securely fastened and in no danger of breaking in transit. Don’t expect any accessories, but when you have a figure that’s over a foot high, I think you can forgive the lack of them!

And don’t be thinking that it’s a solid non-articulated piece of plastic, either. This comes with 13 points of articulation. The well placed and designed joints means that even though it’s oversized, it’s easy to pose, and well balanced – you really have to go out of your way to make it fall over. Kids (and big kids like me) are gonna love these things! 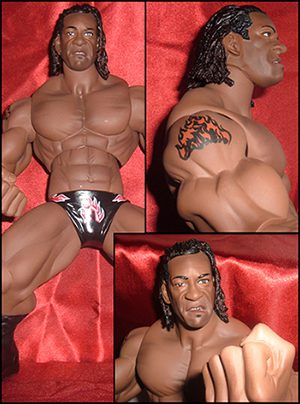 Just because they’ve gone super-sized, doesn’t mean they’ve skimped on the likeness – as you can see from the pictures here, the Booker figure is a damn good likeness for his human counterpart.

There’s a whole range of these figures hitting the shops for about £14.99, with prominent superstars such as John Cena, Undertaker, Batista, Shawn Michaels, Kurt Angle and Randy Orton all available, to name but a few.

Making a figure this big is a risk, but I think it’s a risk worth taking, if the Booker T figure is an example. I have a question about them though – will Finlay’s little buddy will be made in this size?