It’s that busy time of the year at the Wrestling 101 offices. We don’t have real offices, we have eOffices. Just as good eh? This month see’s the release of the most anticipated video game in wrestling history as WWE Smackdown vs RAW 2009 comes to PS3, 360, PS2, PSP, Wii and the DS…phew, what a mouthful.

As we’re all settling down in front of our consoles to get ready to lay the Smacketh Down, we’re still hard at work, bringing you an exclusive interview THQ’s Top Brass; Bryan Williams, creative manager and Dan Ryan, associate creative manager about the new game…

Another year, another SmackDown vs RAW game. What truly sets this apart from previous versions and the new competition in the form of Midway’s TNA iMPACT?

Oh man, where to even begin? I could mention the fact that for the first time ever, players will have the ability to create their own original finishing moves using the all-new Create-A-Finisher mode. I could also mention that we’ve given the Tag Team match a fresh new coat of paint by giving the match type a fresh new redesign complete with brand new functionality and level of importance for the illegal partner in addition to the first ever hot tag functionality in any wrestling game. WWE SmackDown vs. Raw 2009 also marks the debut of the all-new Highlight Reel, which allows players to save footage from their matches, edit them into highlight reel montages and post them online for others to view and rate.

All good enough reasons for me to buy, the new Tag Team match looks amazing on it’s own. We’ve heard about it for a long time, but finally PS3 and 360 owners get downloadable content for their consoles, can you tell us how that works, what will be available and how much it will retail at?

Yes! Downloadable Content finally makes its long awaited debut. While I’m not at liberty to provide any specific details about the content itself, I can say that what we’ll be offering will greatly extend the life cycle of the game and fulfil the request of gamers who prefer their game be as up to date with the WWE Universe as possible.

Last year PS3 owners felt left out when the 360 version got custom entrance music, is that feature available this year on PS3 in addition to the 360 version?

Although this feature was exclusive to the Xbox 360 last year, WWE SmackDown vs. Raw 2009 now features the option to use custom soundtracks in-game on both the PS3 and Xbox 360 platforms.

Certainly something I’ve been waiting for, I felt a bit jipped last year, but thankfully all is now right and us PS3 owners get the feature too. A new feature this year is the Create a Finisher. Something fans have been wanting for many years. The feature looks incredible. How does it work and how robust is the system?

Create-A-Finisher gives players free reign to create their own finishers by selecting from Strikes, Taunts, Clutches and Slams. Up to ten moves can be linked together to create the ultimate custom finisher for Superstars, Divas or created Superstars. With the addition of over 500 new animations, the front finisher situation is absolutely loaded, allowing players to put together countless combinations.

Screenshots from the Xbox 360 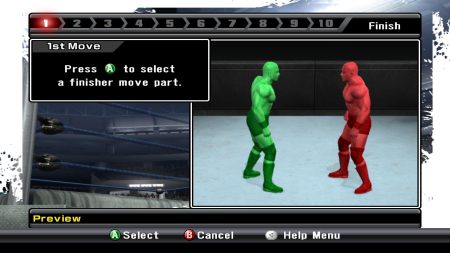 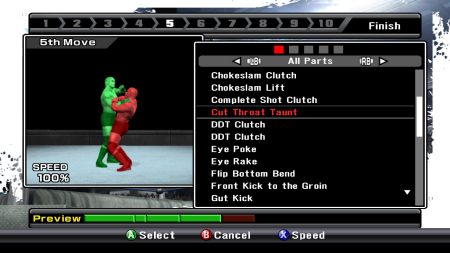 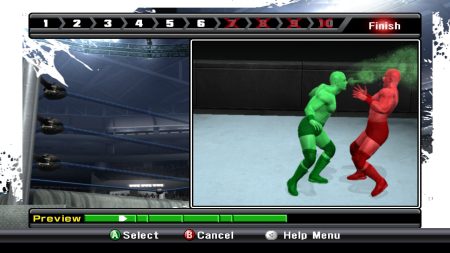 From the videos on IGN.com it certainly looks detailed and easy to use. How do the Wii and Nintendo DS versions of the game differ from the PS3 and 360 versions?

Great question! WWE SmackDown vs. Raw 2009 for Wii and DS offer completely different gameplay experiences, not only from each other, but from the PS3 and Xbox 360 versions as well. The Wii version takes full advantage of the Wii Remote and Nunchuk to give players a completely interactive experience from the entrance, to the match itself, to even the victory scene. The DS version makes it easy take the fight wherever you go. The game features brand new controls that utilize the Stylus and D-Pad, as well as a robust RPG inspired Career Mode, along with the many different match types, Create-A-Superstar and more!

Screenshots from the Nintendo Wii 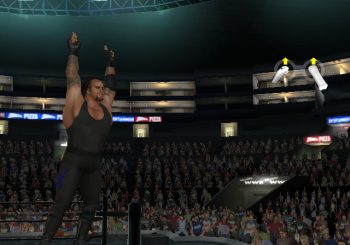 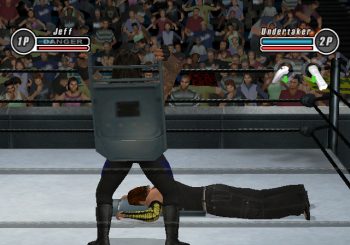 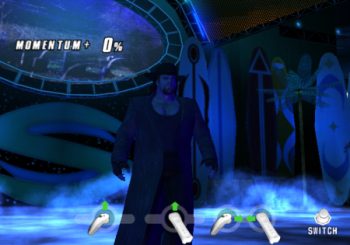 The Wii version sounds very interactive and the DS version certainly has me intrigued…may have to make that an essential purchase with my girlfriend’s DS for Christmas I think! A Collector’s Edition was recently announced for the PlayStation 3 rather than the Xbox 360 like last year. Why the PlayStation 3 for the Collector’s Edition this year and what extras will be get in that edition?

The WWE SmackDown vs. Raw 2009 collector’s edition for PS3 features a copy of the game and a disc with exclusive Blu-ray content. Included on the disc is a behind-the-scenes documentary on the making of the videogame, as well a more than two hours of WWE footage from a variety of popular SmackDown vs. Raw cross-brand matches from 2008. In North America, the content is delivered in a unique steel cage package. Our fans in Europe and Asia Pacific get a cool miniature ring package.

The UK Miniature Ring is great for storing Jakks Build and Brawlers 🙂 What made you choose the WWE Superstars you did for the Road To WrestleMania mode? Obviously a lot of people would like to have seen guys like Edge and Randy Orton with their own stories, is this a possibility for DLC in the future?

In assembling the stars for this year’s Road to WrestleMania, we chose the top talent across all three of the WWE brands. Even though Randy Orton and Edge, arguably two of the biggest RAW and SmackDown stars, do not have their own stories, both figure prominently and play key roles within Road to WrestleMania. Obviously, fans would have liked to have stories created for every Superstar on the roster, but we chose quality over quantity. Each story in Road to WrestleMania was written specifically for each Superstar to ensure that stories were unique and that each Superstar involved be depicted authentically.

The other main career mode has mostly been undercover this year. How does this new mode work when compared to 24/7 and GM Mode from previous games?

The objective of Career Mode is a simple one; obtain as much WWE gold as you can. Players are free to progress through Career Mode using a WWE Superstar/Diva or CAS creation. Players are then put on a Championship track wherein they must face and defeat a set group of opponents in order to be named the #1 contender. Once that match has been won, you’ll be awarded an opportunity to face the title holder and hopefully emerge victorious. After obtaining that Championship, you’ll then be given an opportunity to choose the next Championship path. Along the way, you’ll be able to earn abilities for you CAS, attribute points for your CAS creation and Superstar/Diva, end of match awards and a wealth of other unlockable content.

Screenshots from the Playstation 3 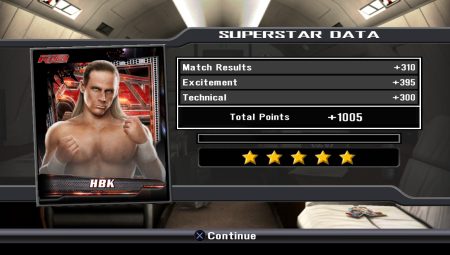 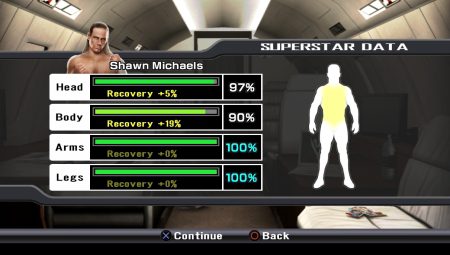 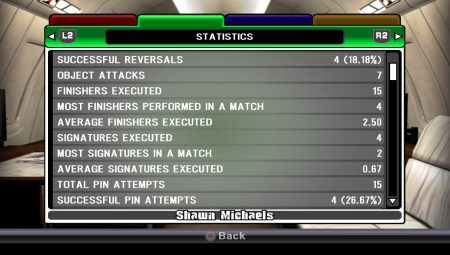 The Highlight Reel looks set to revolutionise the genre, why include this and what can we expect from it?

The Highlight Reel was included for a variety of reasons. We’ve wanted to introduce a replay feature for a long time now, and we began to notice that a lot of players have been posting their matches on sites like YouTube. As a result, we decided to provide players an outlet in which to show off their matches and noteworthy moments within the game itself. Hence, the Highlight Reel was created. At any point in time during gameplay, players can pause the action and replay the last 40 seconds of their matches. In addition, players can save these highlights as video clips for use within the Highlight Reel editor. Players are able to combine multiple saved video clips to their highlight reel and are given free editorial reign over their creation. The Highlight Reel editor contains a wide assortment of editing tools and options such as graphic effects, sound effects, manual camera control, transitions and much, much more. Once completed players can upload their reels online for others to download and view. In addition to reels, players can also take screenshot images and post them online.

Sounds amazing! So there you have it folks, Bryan and Dan are off to work on next year’s game, and I’m left writing this whilst dreaming of THE Brian Kendrick’s gimmick as Downloadable Content. Here’s hoping. Stay tuned folks as very shortly we’ll have an exclusive review of the game here on Wrestling 101.