The music is in the hands of  MC Greg McLaren ‘El Caballero Ingles’ and DJ Toy Selectah of the Mexican super group Control Machete. 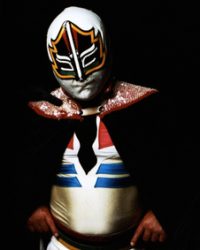 Prices for shows at 7pm on December 6, 7, 8, 9 range from £20 to £60 with ringside seats £75. Group discounts are available with 20% off for groups of eight or more and 30% for groups of 16 or more.  Tickets for the matinee range from £20 to £50 with ringside seats costing £60. Up to two children can get in half price if accompanied by a full paying adult. Tickets can be booked on 0844 482 8008 and more information at LuchaLibreLondon.com and Roundhouse.org.uk

One of the stars of the show on their first tour was former WWE and TNA star Mascarita Sagrada, here he talks about his career and what we can expect to see in London in December.

What first got you interested in professional wrestling and why did you decide that you wanted to be a wrestler not just a fan?

I never actually had much interest in wrestling as a profession; I wasn’t much of a fan to tell you the truth. I’ve always been honest about this, it all happened by accident. I used to box and practice martial arts, so I went to the gym to train and one day by accident there were people training wrestling and I liked it very much because it was very different from the martial arts I was practicing, mainly kung fu. Kung fu, like wrestling, became a hobby. Later on there was a call for mini wrestlers from CMLL and some friends encouraged me to try out. The rest, is history….

How did people react when they found out you wanted to be a pro wrestler?

My mother was the one who was opposed the most, she thought that since I was little everybody would just make fun of me, and she never wanted that for me. When she found out I was going to wrestle she cried, but when I explained to her why I was doing it she accepted it and wished me luck. As far as my friends, they were always very proud of me seeing me in the ring.

You were trained by Muralla Sangrienta I and Sr. Genaro Contreras, how did you find the experience?

As with any sport, you have to be disciplined and dedicated to it, even though it is very hard and dangerous to tell you the truth. I am able to maintain my level because I have never stopped training.

How excited are you about the forthcoming shows in the United Kingdom?

Without a question i’m excited about it. For me it’s another accomplishment in my career. After 18 years in the ring, I’m still capable of leaving the fans excited and satisfied about my matches. I hope the lovely people of London are part of this.

For readers who haven’t got that much experience of the Mexican wrestling scene, can you tell us a bit about the companies in Mexico and the style of wrestling?

I think that when fans from all over the world don’t know much about Mexican lucha libre, it’s not their fault, but because the Mexican companies have never been able to really promote or show the rest of the world what we are capable of doing, they only care about filling the arenas no matter what.

What can fans expect when they see you in London in December?

As far as we’re concerned, the minis, we always do our best and give our all so that fans go home satisfied.

How many masks do you have and again for those of my readers who aren’t too familiar with Mexican wrestling, what is the importance of the mask to you?

I have approximately 15 masks that I’ve taken from opponents. In Mexico, your mask is your most prized possession and losing it the worst that could happen. I’ve never lost mine in 18 years. In Mexico the meaning of the mask is almost sacred, no pun intended. I am proud of mine and have always done my best to protect it.

What are your memories of the ‘All Worlds Collide’ event?

All that I can say is that I was extremely proud to have been invited to this event, and it was huge when it happened. The most amazing thing was seeing Konnan and Perro Aguayo fighting for the fans.

Do you think sometimes that there’s a fear that the comic side of your wrestling might overshadow the skills that you show in the ring?

Definitely not. We do our comic bits, but we never lose track of what’s important, which is the sport itself.

When they called us it was very exciting and we were looking forward to it, but once we were there everything changed drastically. I don’t really care about the name, here in Mexico we’re called MINI SUPERSTARS.

It must have been a disappointment for you when they ended the division?

Truthfully, yes. It was a disappointment. WWE changed things in a way that what we did was not actually our work, but what the matchmaker told us to do. We received a letter from them telling us they were “expecting more from us”, but all we did was follow instructions. The person they assigned to us is the one who truly failed. Had we known what was going to happen, we would’ve disobeyed and done our own thing. In the end, things ended cordially and we were always grateful for the opportunity. Not speaking English hurt us.

How do you feel about that decision now that Hornswoggle has proved to be one of the most popular characters in the company?

Without any disrespect, I don’t know him and I never met him, I’ve heard good things about him and wish him the best, but I have no idea who he is. Let’s hope he is still as popular in 17 years, as we’ve been.

Who have been your toughest opponents?

Without any doubt, the most ruthless and challenging one will always be Espectrito

What companies do you wrestle for at present and what are your ambitions in the future?

I’ve been WITH WWF-WWE, WCW, TNA, AAA, CMLL, FMLL, Lucha VaVoom, many others. There is a possibility of coming back to Europe for a tour too.

You’ve appeared in several films, is acting something you’d like to do more in the future?

Yes. I’ve done many movies like La Revancha (with Atlantis and Octagon), Luchadores de las Estrellas (with Volador and Misterioso), Tierra de Lobos, My Giant (with Billy Crystal), and recently Feast 2 and 3. It’s a lot of work, but a lot of fun, I would love to keep doing movies.

You’ve also been in TNA and appeared at the ‘Victory Road’ PPV, what was it like being in TNA and how do you think the company compared to your time in WWE?

I honestly am very grateful to TNA for the opportunity, and they were wonderful, but nobody compares to WWE.

There’s been problems in recent years with other wrestlers using your name, especially Tsuki, can you tell our readers the problem this caused Tsuki in Minneapolis last year and how you feel about this behaviour?

They’re not really to blame for all the problems. They’re just trying to make a living. The responsible ones are the promoters who hire them. What I hate is that they try to take credit for all my achievements. That, I can’t forgive. They’re good wrestlers in fact, but they should make their own name for themselves, not usurp mine. With Tsuki, it is a more personal problem that I don’t want to talk about, but we have our history. In Minneapolis Mascara Sagrada was going to perform with him and realized he was gonna present himself as me, Mascarita, so he warned him to quit it and confiscated the uniform, since Mascara Sagrada owns the legal rights to my character and I’m the only person he’s ever authorized to be Mascarita Sagrada.

What is it about Bruce Lee that makes you such a fan of his?

Anybody that’s ever practiced martial arts understands this and admires him. He was the real deal, no special effects or lies, he was a perfect athlete and very disciplined and motivated.

Can you tell our readers more about the charitable work that you do, particularly with children?

I’ve always believed that if you receive, you have to give too and I’ve been very blessed in my life. The satisfaction of doing charity work is indescribable, especially when you go visit people that can’t go to the arenas because of an illness. It is an important part of me but I keep it private.

What was it like appearing in the music video of ‘Uruapan Breaks’ by Kinky?

I was very flattered by this invitation, especially because they are not from the wrestling world. It was a lot of fun to be a part of this and I was very excited when I saw the video for the first time. And the nice thing is that it did not end there and we all became friends, I still see them every now and then and have a good friendship with the producer/director of the video.

How can our readers find out more about yourself and your career?

I invite you all to visit my myspace page at myspace. com/mascaritasagrada and if you ever want to contact me directly or ask me a question, you can e-mail me at [elautenticomascarita@yahoo.com.mx]

Thank you for the interview, see you in London! I send all of you a sincere greeting from your always friend, MASCARITA SAGRADA.