EWW are back with a bang and have announced not just a set of dates that see them putting on shows across the country but with several top American stars heading this way in May.

Now renamed ‘Extreme Warfare Wrestling’ the company made their return with  ‘Night of Destruction’ held at the Kings Hall in Herne Bay on March 13th.  Highlights included The Dominator retaining his World Heavyweight title with a win over Phil Powers and then receiving a challenge from The Boogeyman, Phil Bedwell beat Ashe to keep his St Georges title, Marty Scurll beat Jonny Storm and Skarlett beat Jetta by DQ.

On April 28th it’s ‘Crash in Coventry’ at the Kasbah Nightclub with Jonny Storm taking on Raven in an Extreme Warfare match. May see ‘Night of Champions’ at the Liverpool Olympia (May 1st) with Al Snow facing Raven in a Falls Count Anywhere match and Lance Cade taking on Kenny Dykstra. The following night it’s the ‘Battle of Hastings’ at the Summerfield Leisure Centre.  The company have also announced a series of shows at holiday parks from April to August.

Time for Chris from EWW to tell us more about the history of the company and their plans for the future.

For those fans who aren’t too aware of EWW, can you tell me more about the history of the company?

Back at the end on the 90’s British Wrestling was very stale, for the most part it seemed to be stuck in the World Of Sport Era but with none of the glamour, there was just no buzz about it.  That all changed in December 1998 when EWW founders Stu Allen and Jamie Clubb debuted EWW (then known as Extreme World Warfare) The Declaration which saw appearances by relatively unknown stars Jonny Storm, Alex Shane and Jody Fleisch.  With a steel cage main event, the use of tables, chairs, barbed wire and even a bottle it’s not too surprising we were noticed.

Nearly a year later and our Scorched Earth event was the subject of a police investigation following a report in the Oxford Times branding us “Barbaric” and even a Central News Report.  Needless to say the show was an astounding success and the next report the paper ran (having actually witnessed the show) was much more positive.

Over the years we’ve put on shows that have always been well received, matches that people still talk about and DVD’s which always deliver something extra to the fans.  WOW magazine once called us “The most innovative promotion this side of the Atlantic” which is something we’ve always been very proud of, but as time has gone on more and more promotions cropped up that were also putting on good solid modern shows, so it wasn’t surprising that by 2004 we were lost in the shuffle.

EWW haven’t promoted a show for a fair while, why has that been the case and why the decision to return now?

Our last show was Cruel Britannia 2 in July 2007 but there were a lot of problems promoting the show, Stu Allen, who by that time was running the company with assistance from myself had moved away from the Oxford area where we ran.  There was never a conscious decision not to put on any shows, but with him being down in Hastings and myself living in Stamford it became very difficult to put anything together.  On top of that he was doing a fair bit of work for LDN and I was busy working as a DJ.

Now EWW has a new owner who along with the old management has been able to open a lot of doors and generate interest in us from a variety of venues.  The hardest part of being able to run a wrestling promotion as a business rather than a hobby is having the time to dedicate while still working a full time job, Billy Wood is in a situation where he can give this a full time commitment and I’d say it’s already paying off.

The line-up for the tour includes Raven, Kenny Dykstra and Lance Cade (who face each other), what do you think the fans can expect from these stars and why were they chosen?

I think Raven’s a fairly obvious choice for us, we’ve always pushed the envelope which is right up his street, in fact although he is aiming for a shot at The Dominator’s World Title while he’s over here, he’ll actually be facing Jonny Storm in Coventry (April 28th) in an Extreme Warfare Match.  I’m personally quite interested to see what Kenny and Lance will bring to the table, they were chosen because of the familiarity they’ll bring to the WWE fans, but it’ll be interesting to see if they work the WWE style and show us something else. 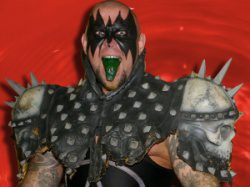 The Current EWW World Champion is The Dominator, can you tell our readers more about him and who the main challengers to his title are?

The Dominator’s been wrestling for a good 15 or so years now having been trained by Adrian Street in Florida and I’d say he’s definitely in the UK’s elite as far as character goes.  When he comes down to the ring wearing the shoulder pads and mask or even if he’s just sporting the green tongue and face paint he has a real presence about him.  For most of his career he was always the bad guy but over time kids and adults alike began to really like the character and it’s now rare that he doesn’t come out to a chorus of cheers.

He won the title 2006 in an Extreme Elimination match (essentially a Royal Rumble) which featured the likes of the UK Pitbulls and WWE’s Katie Lea.  In Herne Bay at Night of Destruction (March 13th) he’ll be defending it against Phil Powers, but when Raven signed on with EWW he made it perfectly clear that he had the belt in his sights as did Al Snow who will be facing Raven in a Number 1 contenders match at Night of Champions in Liverpool on April 30th.

How can our readers find out more about EWW?

Primarily our website (eww-wrestling.co.uk) but they can also become a fan of EWW on Facebook which will allow them to receive regular updates.