Over on the Talk Wrestling Online forums we have had a contest for members to post their favourite WrestleMania moment. Here are just three of the responses we have had:

Dan:
Ask a wrestling fan for two “controversial” names in the world of wrestling and somewhere in the responses you will hear the names, Randy Savage and Ultimate Warrior, I dare say you’ll hear both names more than once. However, for all the controversy surrounding both guys, and for all the criticism both guys get, on March 24th 1991, these two guys, along with two of the leading females figures in professional wrestling, created one of the most magical moments in the world of professional wrestling, and my personal favourite Wrestlemania moment.

Wrestlemania 7 was headlined by Hulk Hogan vs. the Iraqi sympathizer, Sgt. Slaughter, but the night belonged to The Ultimate Warrior and Randy Savage, as they battled in a “Retirement Match”. Macho, along with Sensational Sherri had engaged in a bitter feud with Warrior, stemming from Savage costing Warrior his WWF Championship at the 1991 Royal Rumble, when Savage interfered in the match, attacking Warrior, and ultimately smashing a septor over his head, allowing Slaughter to get the victory.

So the match was set, and you knew something special was going to happen, when Warrior came to the ring, not because he came running a million miles an hour, but because he walked to the ring, he WALKED TO THE RING! To me that emphasised the importance of the match, people often criticise Warrior for his lack of in ring psychology, but that night, whether it was his choice or someone elses, he hit the nail on the head. The match itself was amazing, in my eyes easily Warrior”s best match of his career, for me, much better than his match with Hogan a year earlier.

I really don”t want to spoil the actual match itself for anyone who has never seen it; I”ll just say that both men delivered on every level possible.
The match was great, no arguments, but what over shadowed it, and rightfully so, was the aftermath, which saw Randy Savage go from being one of the most hated figures of the time, to becoming one of the most popular stars on the roster, without even opening his mouth and uttering a word to the fans. Savage”s valet, Sherri brutally attached Savage after the match, leading to Savage”s former wife, Miss. Elizabeth running to the ring from the crowd, and saving Macho from the clutches of the manic Sherri. Then in the most beautifully booked segment in WWE history, Savage and Elizabeth reunited, I think it could easily be described as one of the most emotional booked moments in WWE history, yet alone, Wrestlemania history.

Vince McMahon, and his crew, often get criticised for a lot of stuff they produce, and rightfully so, but that night, all parties involved , including the bookers , talent, and even the fans, for embracing the moment, made Wrestlemania magic, and subsequently created my favourite Wrestlemania moment. 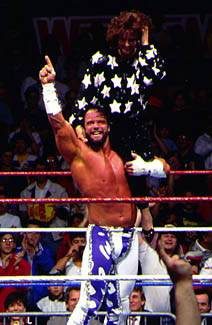 It easy to be cynical, and its easy not to appreciate wrestling for what it is, for me, it”s about escapism, and becoming involved in larger than life angles, with larger than life characters, and wanting to cheer and boo them, and that was what that moment was about, and for me, it made me care, and its often hard to make wrestling fans care.

Jimmy Redman:
I’ve been watching a lot of Mania lately to get in the mood…for the PPV, obviously, and as much as I loved them I still couldnt find anything in Manias 21-24 to compare to what has to still be my favourite Mania moment – the end of Wrestlemania XX.

It was my first Mania and I was still a mark, 2004 in general still holds a special place in my wrestling heart. Without fully knowing about or appreciating the extent of Benoit’s career odyssey, they pushed it, and him, well enough on TV in the build for me to get behind him and want him to win. Ditto for Eddie in a similar way. He was so damn likeable. The build for the WHC with the HBK/HHH feud continuing while Benoit inserted himself into the picture was great, I liked it. The match itself felt like a big match, and it delivered in a huge way, with a perfect finish. I’ve watched the match probably 10 times by now, and yet I do not fail to get emotional when I watch Benoit’s reaction, even post-murders. He and Eddie drowning in a hail of confetti and embracing as the grizzled veterans who had finally, finally done it was just incredible. Just a perfect wrestling moment. 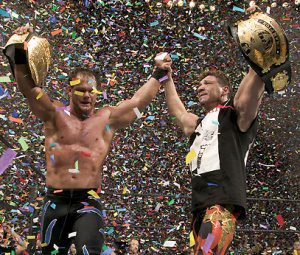 Nemesis Enforcer:
I know its a cliché to say it but Hogan slamming Andre at Wrestlemania III is my fave Wrestlemania moment and that is because it was the first ‘big’ moment in wrestling I ever saw. I was only about 5 years old and hadn’t seen a PPV before then the local shop started selling VHS’s of Wrestlemania, Survivor Series and Summerslam so I saved my money together and bought Wrestlemania II & III.

I watched III first for some reason I forget now and was really enjoying the undercard as I hadn’t seen much WWF programming just the odd Saturday Nights Main Event and then it came to the main event and I was stunned by it, being so young really helped that as I was far less cynical and much more easily amazed at the size of Andre.

During the match when Hogan tried to slam Andre but hurt his back due to the weight of the giant I was holding my breath and cheering Hogan on like mad and when ever Andre was on the attack I would boo and call for Hogan to get up, like all kids do I guess.

Then came the end of the match, ‘the slam heard around the world’ as it became known (although I found out much later it wasn’t the first time Andre had been slammed), as soon as Hogan went for the slam I still remember getting to my feet and shouting my lungs out as he lifted the giant up and slammed him down. After that moment I didn’t care what else happened in the match, I was just marking out too hard 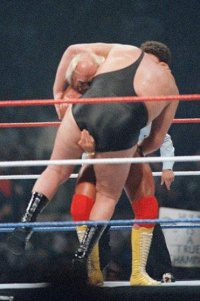 That moment set me on a life long love of wrestling, and for that reason will always be my favourite moment deep down as it keeps the innocent little kid alive in me and reminds me of what its like to be truly amazed by wrestling.

Why not reply below with your favourite WrestleMania moment and why it means so much to you?

One reply on “My Favourite WrestleMania Moment?”

When Undertaker won against Batista at WM 23. It was very reminicent off his victory at WM 13 in Chicago which I know was a truly special moment for both Mark Callaway and his loyal fans. Everything was right in the world at WM 13 and 10 full years later in Detroit! Also a surprisingly good match between Taker and Dave.