As you probably already know if you are reading this article, the founder and president of Pro Wresting NOAH and a man who personified Japanese wrestling maybe more then anyone since the turn of the 90’s, Mitsuharu Misawa, died on the 13th of June 2009, the supposed cause of which was a heart attack that struck when Misawa took a bump from a belly to back suplex (or backdrop in Japan) from NOAH veteran Akitoshi Saito.

He was doing at the time what he loved to do and had resisted calls to retire for the past few years – he couldn’t bring himself to do it, NOAH had been going through some tough times with the loss of television deals, injuries to established stars and the tough economic climate making it hard for wrestling as a whole in Japan at this time.

Misawa was a wrestler, perhaps the biggest name in NOAH (some would say it is Kobashi but Misawa made Kobashi but I digress) and in his role as both president and biggest draw he could not walk away, it was his company, these wrestlers had left AJPW to form NOAH with him and he had to carry them and keep the business going to pay them back for their loyalty to him.

We could all see he was not the same man that had wrestled more five star matches then any other man in professional wrestling. We could see that middle age and the years of pushing the envelope of what could be done in the ring had not been a kind bed fellow, but still he carried on.

Wrestling was his life – he was a successful Junior Heavyweight in his teens at amateur level, placing fifth in the World Championships in 1980 at the age of 18. Not long after he signed for AJPW and made his debut in 1981 and under the careful teachings of the late, great Giant Baba he continued to improve before he took on the task of becoming the second generation of Tiger Mask in 1984

For all his talent it can be argued that the mask and the burden of the gimmick held him back. He outgrew the role, both in terms of size and ability which coupled with the lost of Tenryu to the company led Baba to unmask the now twenty eight year old and push him against Jumbo Tsuruta as the next ‘native ace’ – Misawa did not let him down.

After beating Jumbo he carried on growing, not an over night ride to the top but a steady growth which lead to his final ascent to the top of the tree in 1992, when he defeated Stan Hansen with one of his famous Running Elbow’s to become the Triple Crown champion. 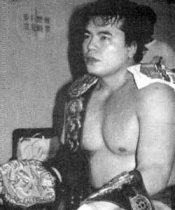 He would hold that title for just under two years before falling to Steve ‘Dr Death’ Williams. During the reign he beat Hansen twice more, as well as Akira Taue, Williams and also taking out his partner and his future rival Kawada three times for a total of seven defences, a record that only he would better until his departure from the company six years later (it has since been broken by Kawada with ten defences and his later record of eight was also equalled by Kojima).

It was that final collision with Kawada, on the third of June 1994, which was also his last defence of that reign that is the most famous though. It has been heralded as the greatest match of all time, one that still holds up today as a shining pinnacle of the profession, a match that even when I watch it now fills me with emotion and makes we jump with the near falls even though I know the result as it was etched into the record books fifteen years ago.

Misawa continued to be THE man in AJPW throughout the 1990’s, helping the growth of Kawada, Kobashi and Akiyama as firstly their partner and then their rival, hold numerous titles and gaining just as many accolades and plaudits as well as being an innovator – The Tiger Suplex ’85, Tiger Driver (and TD ’91) and the Emerald Flowsion being his lasting contributions to the move sets of wrestlers the world over.

Then came the moment that changed the shape of Puro forever – his departure from All Japan to form the new company of Pro Wrestling NOAH in the wake of Giant Baba’s death and his fallout with his widow.

Nearly the entire roster, from the top to the bottom left with him, an indication of the loyalty and the trust inspired in his fellow workers, they all left the company that had built them and housed them to follow Misawa and his beliefs. Only Kawada (who hated Misawa) and Fuchi remained from the native roster along with the aged Hansen and the young Mossman (soon to be renamed Taiyo Kea) from the ‘Gaijan’ remained as All Japan listed and nearly closed.

Some never forgave him for this act, feeling it a betrayal to the man who had built him but it was not a cross that Misawa took lightly. But for me he carried on the same style that Baba had built in All Japan, the same principles of pushing your own talent first and using outsiders to build them, thus making it not a disloyal leap of self love and arrogance but that which came from being painted into a corner and having no choice.

At this stage, in the year 2000, at the age of 38 that the first calls for him to step out of the limelight came and despite what some people say he listened to them. His intention had always seemed to be that NOAH should be built of the back of a long and great feud between Kobashi, the last pre-split Triple Crown champion of AJPW, and Misawa and Kobashi’s protégée, the rising star that was Jun Akiyama.

This however was curtailed by the simple fact Kobashi had no knee’s. They where gone. He needed reconstructive surgery on both of them and then when he did come back they blew out again, leading him to need MORE time away.

In the absence of Kobashi he had to take on the mantle as the biggest star and try and pass the torch himself, which he did, defeating Takayama in a tournament final before dropping the belt to Akiyama and then heading off into the tag team ranks. 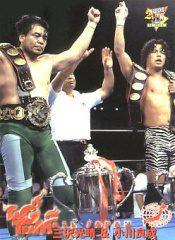 But still for big cards that need big matches he was there, whenever a chosen champion faltered and business was bad, he was there, it was his cross to bear, his burden and he refused to let anyone suffer for it.

He was wrestler after all, if there was a problem then he believed he could solve it by wrestling and that is what he did, right up until the end, he did it because it needed to be done, it was his company and it was his job to fix things.

It was that same drive that led all of those men to follow him, to put their bodies and the line for him and to build a company that within four years was running shows in front of 58,000 people at the Tokyo Dome. It was the reason thousands upon thousands of people across the world admired, hell even loved him because he had a dream and he followed it, no matter the cost to him personally, no matter the risk.

He would not ask someone to do something he wouldn’t do himself, a trait of a great leader and that is why on June the 13th Mitsuharu Misawa was in the ring in Hiroshima, at the 27th minute mark of a GHC Tag Team championship match taking a back suplex from Saito, a move he has taken a million or so times before not knowing that as he prepared to take that same routine bump it would be his last seconds on this earth.

There is no doubt in my mind that the move is not what caused his heart attack and death. It may have been the inadvertent trigger but it was not the underlying cause as we all know injuries may be common place in the ring but death is something far rarer.

Instead we have to look to the stress that Misawa-san was under, NOAH had lost it’s TV deal, it was losing money, people may need to be cut from the roster, the same loyal people who had helped build his career and his company and as president and number one star the stress must have been a suffocating blanket to him. Couple this with the fact that he was five days shy of his 47th birthday, heavier and more unfit then he had ever been due to injury and was clearly pushing himself to the limit and the cause of his tragic demise becomes clear.

But even when I stare at this facts in the clear light of day, even when I know the biggest one of all is true and Misawa will no longer light up a ring with a quick flurry of elbows or a Tiger Driver, still it has not quite hit me fully that an icon of this business, a man who truly deserves to be hailed as a legend in a sport littered with men not worthy of such a label is gone, never to return.

I once wrote that I hoped Misawa would provide NOAH with the bright future he was working so hard to give. Little did I know that only two years he would no longer be with us, but I am sure that somehow and someway his spirit will live on and even if NOAH cannot recover his pupils, such as Marufuji, Morishima, KENTA and Shiozaki, will carry on his beliefs, ideals and his greatness and spread the same kind of joy I felt, just a year ago, watching the man in the flesh just a few feet away in Coventry. 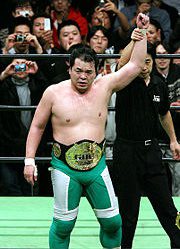