Jeff’s departure has rendered the WWE a one-Hardy zone so with his sibling out of the way is it time for Matt to step out of the darkness, mirror his brother and reach the pinnacle of his profession?

As the Charismatic Enigma gave his farewell address to the WWE on a recent episode of Smackdown, it became apparent that times for both Hardy’s were about to change.

Jeff’s defeat to CM Punk in a ‘Loser Leaves the Company’ steel cage match has allowed the exuberant high-flyer to experience life outside the madcap world of professional wrestling once again and given him a respite from the spotlight. Matt, on the other hand, has been supplied a golden opportunity to blossom.

Forever in his sibling’s shadow, the older Hardy’s time has come. He does not need to compete with Jeff any more, he just needs to seize the main-event status that his colourful brother has left behind.

That will not be easy though. While Jeff has detractors for the way he lives his life (critics who will have even more to condemn after his recent arrest) and accusations often fly that the purple-haired daredevil is nothing but a glorified spot-monkey, no-one can deny the three-time world champion has that magnetism which sets him apart from the norm. Can the same be said about Matt? 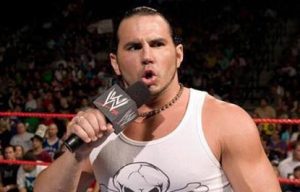 He certainly does not look like a star and in an industry where appearance is half the battle that is sure to count against him. He does not find it effortless to talk like a star either, and he hardly oozes charisma in the way the majority of the top-stratum performers do, but the former ECW champion does have one thing going in his favour, a typical Hardy trait – fan reaction.

Whether WWE enthusiasts were scowling at his antics as he distressed Jeff in their bitter rivalry at the start of the year or whether they now bellow in delight as he seeks retribution on Punk for ending the career of the brother he now loves again, Hardy harvests the crowd’s attention. Matt may not tick every box but he has put a mark in a very important one.

The main-event is symbolically linked with holding the world title and while that is probably Hardy’s ultimate wrestling dream, being at the top of the WWE tree is not about donning gold. It is about telling a story and providing engrossing feuds for viewers to get excited about, and the North Carolinian has already illustrated he has that in his arsenal.

Spring time’s Hardy v Hardy confrontations elevated the elder sibling to the apex, albeit briefly, and even though Jeff’s venturous move-set wowed the audience, it was the narrative of the tale, held together by Matt’s angst, jealousy and rage, that made it so captivating.

It was not the first time Hardy had given us such an interesting feud either. His altercations with MVP in 2007 and 2008 were the best thing on Smackdown and when he was drafted to ECW last year, the clashes with Mark Henry over the brand’s strap (bar the dreadful DQ fracas at Summerslam) were far more entertaining than anyone could have expected. And we must not forget the personal turmoil that was exuded so beautifully in Matt’s conflict with Edge. All Hardy requires now is the freedom to build storylines at the zenith of WWE for an extended period of time because he can unquestionably get it done inside the ropes.

As while constructing animosity is all well and good, a rivalry will quickly fall down if the in-ring combat is not good enough to back it up. Those preceding feuds were augmented by the wrestling where Matt demonstrated he could go toe-to-toe with a cornucopia of superstars and deliver.

The size of Henry, the jack-in-the-box style of Jeff and the ground-based game of MVP; Hardy extracted gripping matches from all of them. He has done the same when faced with the technical finesse of Chavo Guerrero and another effervescent opponent in Evan Bourne.

Matt is the glue of many a match, with him involved the skirmish is very likely to be strong one, and like the chronic main-event crowd, the multi-time tag team champion’s bouts are more akin to a chapter from a story than a wrestling showcase.

And even though this editorial mocked Hardy’s vocal expertise earlier on, he is far better in that regard than he is given credit for. While Matt will never be on par with Chris Jericho’s magniloquence, if he is given the correct words and projects them in the appropriate way, he is actually quite an adept elocutionist.

When Hardy verbally ripped apart his brother prior to their Wrestlemania contest, he did it in a delightfully sadistic manner and was as compelling on the mic as he has been in his entire WWE tenure. If he can generate a way to be as potent with his words whilst being a face, Matt’s hopes of becoming a perpetual focal point could come to fruition.

Unfortunately, though, they also may not. Hardy lacks the immediate sparkle of a Shawn Michaels, a John Cena or a Jeff Hardy and is very similar boat to his newest adversary CM Punk. The greasy-looking Mr. Straightedge is another one without instantaneous WWE-style pizzazz but with the help of fan admiration, he was given a chance to shine and has transformed from solid performer into the most fascinating personality on televised wrestling.

Yet, while Punk was never the stereotypical WWE main-eventer and he has had to work incredibly hard to become one, the World Heavyweight Champion has always had a certain je ne sais quoi or the earlier mentioned magnetism that sets someone apart from the norm; the magnetism that Matt has not yet shown he possesses.

If he does have it, he needs to display it now. There is no Jeff, Rey is suspended, Edge is injured and the young guns could do with a bit more polishing but that situation will not last for long. If Matt Hardy has it within him to reach the peak of the WWE, he needs to act fast. This could be his final chance.