Hello loyal SSP followers, I hope you enjoyed my predictions for the Chamber; I know I enjoyed the results…so before I get started with my next predictions I just want to say…the King of the World is back on top! Long live Jericho as champion, I know Edge is probably set to win at Wrestlemania but let me just enjoy this why it lasts…Anyways In the latest edition of the SSP shall be updating the SSP Top Ten (with added NXT), The quote of the week, the latest “Good Idea! Bad Idea!”, I shall be replying to comments from my previous blog for the first time and I shall give you all my Money in the Bank Predictions. Now before I begin the predictions I just want to point out that at the time of writing I have see this weeks Raw and NXT; so if you haven’t seen NXT yet you’ll want to avoid the SSP Top Ten until you do. Also, I did have Christian in mind for this blog before he qualified and haven’t seen Smackdown yet so I don’t know if they’ve started Money in the Bank matches yet or who qualified if they did. I would of liked to of gotten this blog out before the matches started like I did last year but I wasn’t quick enough off the mark. With that said; I will begin. 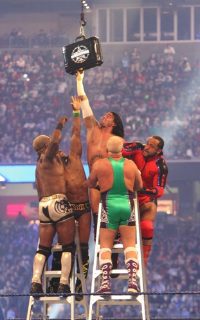 The 6th Annual Wrestlemania Tradition to take place at University of Phoenix Stadium in Glendale Arizona.

In my opinion Christian is joint odds on favourite for this year. He was the most popular star on ECW and have been signed to Raw where he’s surly going to up his game. Adding to the fact that an Edge and Christian reunion is due this year either as a feud or a team; I think it would make for great television if Edge was carrying the title at the time and while Christian held the Money in the Bank briefcase.

I said Christian was joint odds on favourite and that’s because of this man. Kofi has had a hell of a year and his popularity shot up during his program with Randy Orton. I think Kofi should be pushed that little bit more so we can truly see how far he can excel. With the year he’s had he thoroughly deserves some more decent storyline involvement.

This just goes without saying, Evan has to be in this match. I can’t see him winning the match but he can potentially do some really crazy stuff in this match. He just has to be in it, and hopefully following this match he will get some more deserved air time (no pun intended J) …. Here’s hoping.

There was an awful lot of people after last year’s Wrestlemania that thought Benjamin deserved to win, and I have to admit that Benjamin is the work horse of the Money in the Bank match, he’s just unreal and not afraid to take some serious bumps. I think Benjamin’s the first name on the card every year when this match is announced but that’s kind of a good and bad thing for Benji, in my opinion he still needs more work while holding a mic but as far as everything else goes, there’s no reason why he shouldn’t win this match and complete in main events.

Kane to me is one of the most underrated wrestlers in the WWE, he should be in the main event picture an awful lot more than he is and defiantly deserves another title run before he calls it a day. He plays the monster character so well as a heel, his work rate is something I’ve always enjoyed (and no I’m not including the Katie Vick story) and I would love to see Kane win and cash it in but to be honest I just can’t see it happening. This match needs a big man to throw the high flyers around and I don’t think Khali and Henry deserve the payday.

Since his move to Raw Jack’s been kind of up and down; one minute it looks like he’s going to be involved in a good storyline and the next he’s on Superstars for a few weeks. Jack’s in-ring ability is amazing, he could potentially turn into a star similar to Kurt Angle. The problem is; I just don’t know what the WWE have planned for him, in saying that though, I still believe he’s going to get his spot in the bank to keep him fresh in people’s mind. Along with Kane, they’ll be the biggest two I see being in this match.

Similar to Jack Swagger in the sense that he’s there on Smackdown doing something every week on and off but he’s doing just enough to keep him fresh in everyone’s mind. I think Dolph has a lot to offer and we haven’t seen him near to his full potential yet. In my opinion the WWE feel the same way and will give him his spot in the bank. With that said, I don’t believe a win is on the card for him, just an opportunity to get himself noticed a little more.

I was very surprised with the involvement that John had in the Elimination Chamber, I expected him to be out of the chamber and eliminated as soon as he done a spot, but he not only held his own in there, he eliminated Rey Mysterio. That’s a fairly big statement. John’s high flying in ladder matches are always enjoyable to watch, and with the form he’s on lately he deserves the payday.

I will be in attendance again this year for Wrestlemania and will be rooting for different people at different stages but if I were to see any of the above win it would be Christian above all.

There were several others that I considered and may actually end up in the Money in the Bank match, so I am going to go over those briefly and tell you who they were and why I didn’t pick some of them.

Neither Sheamus or Triple H were involved in the televised Raw this week, adding to this that all the other storylines seem to be shaping up and Triple H was the man that eliminated Sheamus from the chamber; I’m going to put Sheamus Vs Triple H down for Wrestlemania.

I was surprised R-Truth got into the Elimination Chamber to be honest, I’ve nothing against the guy with the exception of his entrance, he’s just not main event level for me. He didn’t last too long in the chamber either, if he lasted as long as Morrison did, then I might have included him.

Going to keep this one short. A feud has been on the cards for these two for a while; I’ve mentioned this in previous blogs. Plus Punk has won two Money in the Bank matches; it’s time for him to get some singles matches on the card.

Carlito was recently made a WWE Pro for WWE’s NXT program and rumour has it that his father Carlos Colon might he going into the hall of fame; if this is true then Carlito could see his way in the Bank due to a last chance saloon match. That match being a chance for all the stars that have lost a qualifying match to get into the bank.

I don’t think either is doing enough right now to get into the Bank. I think there are other guys who are deserving of it more than them. If any of the two were to go in I’d say it’d be MVP and if he were to replace anyone I’ve mentioned, it would probably be Jack Swagger.

“”You don’t get it do you?… If I can’t beat you at Wrestlemania, my career is over.”

* WWE NXT; I actually really like the concept and think it’s a very clever way of seeing how certain stars react with the fans.

A lot of things into consideration; current storylines and how good they are, work rate, overness (both as a heel and face), backstage goings on and general performances both in the ring and on the mic. NXT has been included; there are only 8 entries because there are only 8 rookies. Previous positions are in brackets…

For the record, I did think it was possible for Sheamus to walk into Wrestlemania as the champion, after all, the fact that he won the title in the first place same as a major shock. I also stated that I didn’t want him to be in the main event, maybe I let the fact that he’s one of my own get the better of me, but I knew it was a wild prediction when I made it.

Eve is now in the Top Ten ;), however I still think Layla is ranked higher because of her PPV appearance and current storyline involvement. Ideally as far as the Womens/Diva’s division is concerned, I would love to see the two belts together again, and what better person to hold both than Beth Phoenix, doing so at Wrestlemania would be a nice touch.

Thanks to all those that commented on my previous blog, if anyone ever wants to question anything I’ve said I’ll gladly reply. I look forward to hearing from you all again.

Shawn Michaels lost to the undertacker and WM25. Shawn michaels is no longer part of the wwe. Thats what I heard. =(

Hey new to the site but you guys are really good I’m enjoying the blogs keep up the great work! I will also will be attending Wrestlemania look for me as the drunk guy waiting on Maryse lol. Have good one!