When I was asked to do a feature about my favourite 25 moments from WrestleManias past, I thought “25? Why can’t I just do 10? I can’t choose 25!”. But as I came to choose my top moments, it became easier and easier as the memories of WrestleMania came flooding back, and I realised that there were so many memorable moments in the last 25 years, it was going to be a struggle to limit it to just 25.

Please also remember that list is based purely on my own personal feelings about the top 25 moments, and I’m sure you’ll agree with some and disagree with others.

So let’s get going with this countdown, and I can see no better place to start than number 25…

When WrestleMania 21 rolled around and the Money in the Bank match was about to start there were mixed feelings, especially from the internet fans. Whilst pretty much everyone knew that it would be an exciting, action-packed match, but many also felt it was just a way to get six high profile names on the WrestleMania card that didn’t have proper feuds coming into the show. But since then, the profile of the match has been raised further and further. Every MITB winner has gone on to use the title shot granted to him to win a World Title (Mr Kennedy excluded, but Edge won the shot from him, and subsequently won a World Title), and as a result the prestige of this match has gone through the roof. All four matches thus far have been top quality, and Shelton Benjamin’s stock went through the roof as a result of his performances in the first one. In fact, if I had to choose a specific moment in a Money in the Bank match, I would have to go with Benjamin running up the ladder to clothesline Chris Jericho at WrestleMania 21, an incredible feat of balance and athleticism. It’s now probably the second highest anticipated match of every WrestleMania, and I know I’m looking forward to this year’s. 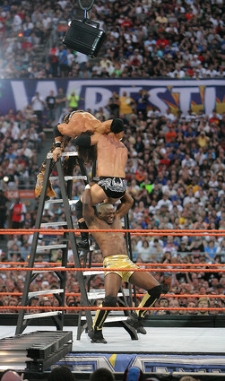 #24 – Battle Of The Billionaires – WrestleMania 23

Who can forget when a fake Donald Trump took on a fake Rosie O’Donnell in possibly the worst Raw match… wait, possibly the worst match in history? As a result, a lot of people became very worried when Donald Trump himself became involved in an angle with Vince McMahon. Thankfully, they both chose participants to compete in a match on their behalf, McMahon choosing Umaga (rip), and Donald Trump choosing… Bobby Lindsey! OK, so Trump forgot Bobby Lashley’s name, but he still gave him his full support come WrestleMania 23. The stakes were raised when it was announced that the losing billionaire would have their head shaved following the match. Then Stone Cold Steve Austin came in as the guest referee, just in case there wasn’t enough hype already. Despite Lashley nearly killing himself with a suicide dive over the top rope, the match was an entertaining brawl, and come Lashley’s victory, Vince duly had his head shaved in the middle of the ring. Trump put a lot of effort into his appearance too, even getting involved in the ring, knocking Vince down, and taking a horrible Stunner from Austin. He also did a backstage skit with The Boogeyman, and asked him for a sandwich. Too funny.

Nobody was expecting the Big Show to return at No Way Out 2008, but when he did, he did so to quite a big pop, particularly as he showed off how much weight he had lost in his year long absence from the WWE (that lasted long!). But things turned sour quickly when an injured Rey Mysterio was still limping around ringside, and Show, seemingly perturbed by this blatant leeching of his time, took Rey into the ring and began to destroy him. Floyd Mayweather was sat at ringside (he had been introduced as a friend of Rey’s earlier in the evening), and Show began taunting him to get in the ring. What happened next will be remembered for a long time, as Mayweather entered the ring, and landed three real shots to the face of Show, one of which broke Show’s nose. That set up their match at ‘Mania 24, where Mayweather entered the ring with all the pomp and circumstance you would associate with him. Despite his lack of wrestling experience, Mayweather was able to work a decent match, which he duly won after a brass knuckles shot to the head. Although the more memorable moment took place the month before, Mayweather’s appearance at Mania was a huge deal to the media, and he was respectful enough to give this huge payday the necessary time and effort. 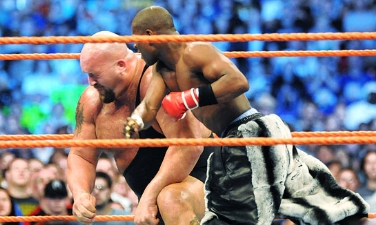 Nobody was quite sure what Pete Rose was doing in the ring as a special guest announcer at WrestleMania XIV. But people sure were shocked when Kane came down for his match against his brother The Undertaker, and proceeded to Tombstone Rose all the way to Red Sox hell. The next year at WrestleMania XV, Rose came out to gain his revenge dressed as the San Diego Chicken, but alas, Kane was ready again, and Rose got his second Tombstone as a result. Fast forward one more year to WrestleMania 2000, and Rose tried to get clever. The San Diego Chicken came out, but it wasn’t Rose in the costume, as he appeared and hit the distracted Kane with a baseball bat. No luck there. It was strike three for Rose as Kane gave him a Chokeslam, and to make matters worse, Rikishi added a Stinkface to the deal. Believe it or not, there were reports that Rose was approached about a spot at WrestleMania X7, but turned it down because of creative differences. Rose and Kane had another meeting in an advert for No Mercy 2002, and in 2004, Rose was the first inductee into the Celebrity Wing of the WWE Hall of Fame.

There is only one match that has appeared on three different WrestleMania cards. The Rock vs. Stone Cold Steve Austin. The two biggest stars of the last ten years collided at both WrestleMania XV and WrestleMania X-7, before their final chapter at WrestleMania 19. This match is famous for reasons that were not clear until maybe so much as a year later, during which time Stone Cold Steve Austin had not competed in another match. This was Stone Cold Steve Austin’s last match. Unlike Ric Flair or Randy Savage, there was no “retirement” stipulation banded around beforehand, nor had they announced it beforehand like in the case of Rowdy Roddy Piper. Austin had only told a handful of people, among those Vince McMahon, The Rock, his good friend Jim Ross, and the crew of the documentary “The Mania of WrestleMania”. To make matters more complicated, Austin was working with a severely damaged neck, and had been admitted to hospital the night before with high blood pressure and a rapid heartbeat. Looking back at this match now there are so many signs of Austin’s in-ring departure, particularly the moment following the match where Rock and Austin privately talk in the centre of the ring. If you can, try and watch the Austin/Rock portion of The Mania of WrestleMania to truly appreciate what a landmark moment this was. 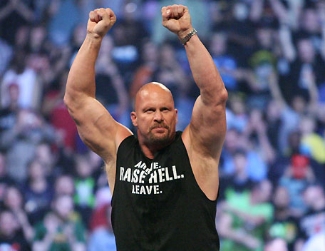