A real once in a lifetime moment now, as we ignore the first, very entertaining, 20 minutes of WrestleMania 19’s main event, and concentrate on when Brock Lesnar nearly broke his neck in the biggest match of his career. People had seen videos of Brock doing the SSP in OVW, and were wondering if this match would be when we would get to see it in the WWE. They were right. Sort of. When you study the footage you can see that Brock is apprehensive before starting, and that the top rope where his left foot is can be seen shaking up and down. This, perhaps in addition to the overwhelming risk of the move, contributed to his literal downfall. Fans around the world were shocked, Brock landed pretty much on the top of his forehead, and the fans in the arena were stunned into a pensive silence. Angle, working himself against doctor’s orders with a broken neck that required immediate surgery following this match, tried to cover for Lesnar by rolling out of the way. Brock was visibly shaken when he amazingly got back on his feet, and seemed to have no clue what he was doing or where he was. He miraculously only suffered a concussion from the move, and was somehow able to finish the match with an F5 shortly afterwards. It’s thought that Brock’s incredibly muscular neck gave him just about enough protection to prevent any more damage. Lesnar has not yet attempted a Shooting Star Press in his reign as UFC Heavyweight champion.

In case there was any doubt, the WrestleMania that featured the most matches in one evening took place at Trump Plaza at WrestleMania IV. I wanted to include something about this WrestleMania in the countdown, but I couldn’t really pick anything decisive that represented the show as a whole. So I decided to just include the whole thing. A tournament took place with fourteen wrestlers vying to become the new WWF World Champion after the title was vacated following Andre The Giant’s attempted sale of the title to Ted DiBiase. Randy Savage ended up defeated DiBiase in the final, with some help from his friend Hulk Hogan, issuing in Savage as the first WWF Champion other than Hogan in the Hulkamania era. Whilst none of the matches had any time whatsoever to be any good, the tournament concept was unprecedented at the time, and looking back it gives WrestleMania IV a real difference to any WrestleMania before or since. 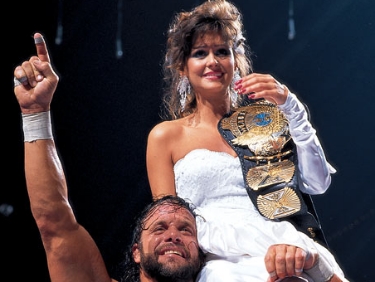 It may be a shock to see this match so low, but the real moments happened on the shows before WrestleMania X8. It was a strange build-up to this match, the intense staredown between Rock and Hogan on a RAW before WrestleMania X8 will live long in the memory, but then so will Hogan trying to kill The Rock by hitting his car with a lorry. Come WrestleMania, and in many ways it was the crowd that made this match special, as the entire of Toronto turned on The Rock and began cheering for their former hero Hollywood Hogan. What followed was a match of pretty dull proportions, highlighted by The Rock’s incredible ability to switch into heel mode and play on the crowd’s reaction. The handshake afterwards is a golden moment for sure, but the nWo’s attempted beatdown made things go on a bit too long in my eyes. I’m sure there will be plenty of people who disagree with me on this one, but hey, this is my article damn it! 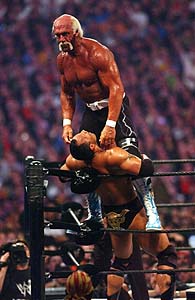 If the fans at WrestleMania X8 made Rock/Hogan special, then they certainly did the same for Lesnar/Goldberg at WrestleMania XX, albeit for completely different reasons. The two men came into this match knowing it was their last; Lesnar had given up his WWE dream to pursue his NFL dream, which was followed by his MMA dream. Goldberg has just given up completely and this was the last day of his year long contract. But in this age of the internet, this sort of news spreads fast, and there’s no more internet-friendly location than Madison Square Garden. The crowd tore into both men before the bell rang, and the chants of “You Sold Out” at Lesnar, was followed by the singing of “Hey Hey Goodbye” at both Lesnar and Goldberg. With the match not getting going very quickly at all, the chants turned into “this match sucks” and “boring”. All these chants were the loudest “smark” chants I’ve ever heard, literally overpowering the announcers voices to the extent that JR had to come clean about what the fans were chanting about. It was truly the most surreal match in WrestleMania history, with only special guest referee Steve Austin getting any love from the New York fans. It didn’t help that the match itself was a train wreck, quite possibly because neither man knew what to do or how to react to the hostile crowd. But the crowd’s reaction in the early moments will be something I never forget, and a lesson to any wrestler that no man is bigger than the WWE, and the fans will always remind you of that.

The Austin/McMahon feud had been the cornerstone of the WWF for over nearly three years. Many say that the “anti-establishment” tone of the feud was the foundation of the Attitude Era, and the main reason the WWF had been successful in the Monday Night Wars. So imagine the shock when, in his home state of Texas, Stone Cold Steve Austin teamed up with Vince McMahon to accomplish his dream of reclaiming the WWF Title. Unfortunately, the moment was lost to the fans in attendance, they saw past the unification of McMahon and Austin and continued cheering their beloved Rattlesnake as he won the title from The Rock after a series of sickening chair shots to a grounded Rock, the chair having been given to Austin by McMahon himself who stood next to Austin cheering his assault on. The alliance only lasted a few months, as the Invasion rolled into town and Austin sided with WCW/ECW for reasons that were never properly explained. But there has been no more surreal moment in WrestleMania history than seeing Austin and McMahon share a beer in the middle of the ring. 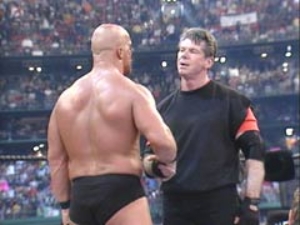