Maybe that heading doesn’t quite do this justice, but it’s the best way I could think of describing it. In the first high profile ladder match the WWF had done, HBK took on Razor Ramon to unify the Intercontinental Title. It would have been easy to pick another ladder-based stunt from WrestleMania, TLC 2 had its fair share at WrestleMania X7, and Jeff Hardy’s dive from the ladder at WrestleMania 2000 was a sight to behold. But whilst compared to the stunts performed at WrestleMania by people like Jeff Hardy in years to come, HBK’s performance in this match thrust him into super-stardom. And no more memorable moment arose from this match than Shawn heading ten feet into the air, and hitting a Flying Splash onto the prone body of Razor Ramon. This one move became a defining moment for not just Michaels, but for WrestleMania as well. 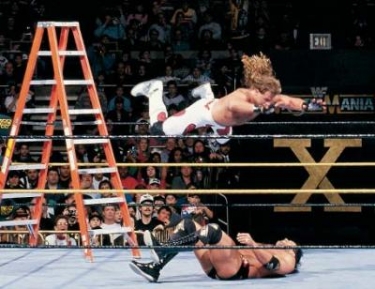 Mick Foley is a strange man. He spent his entire professional career sacrificing his body and mind in acts of disturbing brutality, and whilst his Hell In A Cell match against The Undertaker is the most remembered of his matches, as far as WrestleMania goes he has done some pretty sick stuff too. Who can forget him being Chokeslammed on to two upright steel chairs by the Big Show at WrestleMania XV? But perhaps even more insane than that was at WrestleMania 22. The crowd were in expectancy after Lita set fire to a table at ringside, and when Edge speared Foley off the apron, and both men flew into the burning table to provide a truly memorable “holy sh!t” moment for all those watching. Foley speaks in his book “Hardcore Diaries” of how he craved a definitive WrestleMania moment to establish his legacy, and this awesome stunt finally gave him what he wanted. 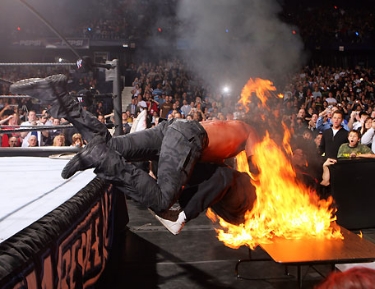 Call me sentimental, and I’m sure Chris Jericho would hate this, but I love the small bits of time given most years since 2004 to the year’s inductees into the Hall of Fame. It gives the crowd a chance to see wrestlers they’ve not seen for a while, or in the case of Flair or Hogan, another chance to cheer them that evening. Whilst the Hall of Fame has had its few criticised inductees, particularly those into the celebrity wing, the recognition given to the legends of the industry and not only the show the night before, but also on the WrestleMania broadcast as well, is a fitting tribute to their years of service to entertain the fans.

In the first of two “entire show” moments in this countdown, we go back to 1985 and the very first WrestleMania. All sorts of legend and folklore surrounds the origin of the first WrestleMania, some say that Vince McMahon risked the entire company on the one event, and had it not been successful then he would have had nothing left. The most clichéd statement surrounding the show is that without it, wrestling today would be a much different industry, and not for the better. It’s difficult to disagree with that statement, as the mixture of celebrities, from Mr T to Liberace, to the big drawing Main Event between T and Hogan taking on Piper and Orndorff, lay the foundations for the one yearly show that tops all others. No wrestling company has come close to matching the grandeur of WrestleMania, and the very first one is where it all started.

WrestleMania is all about the big attraction to draw fans in, and back in 1998 they chose the one big attraction that trumped anything WCW had come up with. There was the big money match between Steve Austin and Shawn Michaels for the WWF Title, with the celebrity involvement of Mike Tyson, at the time one of the biggest sports stars in the world. The match had a certain inevitability about it, Michaels was suffering from a severe back injury that would keep him out of action for four years, so Austin was almost certain to win. And he did, with the surprising help of Tyson who Austin had brawled with just weeks before, and Tyson had even pleaded his allegiance to DX beforehand. Tyson counting down Austin’s shoulders became a legendary moment, as the torch was passed from Michaels to Austin (well, maybe thrown and caught, the 1998 HBK wouldn’t have willingly passed the torch to anybody), and the Austin era, which soon became the Attitude era, had begun. 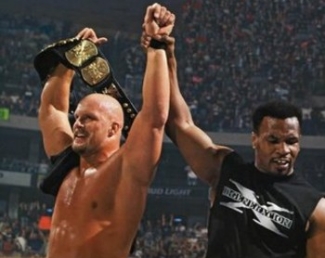