WrestleMania 25 was the celebration of 25 years of the greatest show in wrestling history, and the show featured one of the most iconic matches in wrestling history. The show itself had started off very hit-and-miss, from the outstanding return to action of Ricky Steamboat, to the seemingly endless Kid Rock concert which completely destroyed the Diva Battle Royal. Then came along a match that had been very well built up over the past few weeks, Shawn Michaels vs. The Undertaker. And it started with some incredible entrances. Michaels, representing “light”, was lowered from the ceiling with his arms outstretched dressed all in white. Undertaker, representing “dark” was raised from below the ramps surrounded by flames wearing his usual black attire. And it only got better from then on. The two men with a combined age of 89 put on a match that nobody will ever forget. From The Undertaker’s insane yearly dive over the top rope that nearly had a horrible ending, landing right on the top of his head, to the trading of near-fall after near-fall at the end, there are memorable moments throughout. Michaels hit two Sweet Chin Musics, but Taker kicked out of both. Taker hit a Tombstone and a Last Ride, but Michaels kicked out of both. Finally, Undertaker retained the streak and went 17-0 with another Tombstone, and the crowd went nuts after witnessing an all-time classic. The two men head into WrestleMania 26 with a re-match in their sights, and fans all around the world are left wondering whether Part 2 will be better than the original, or if it will pale in comparison. 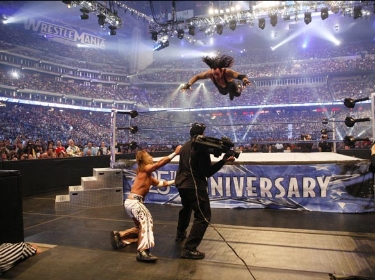 “I’m sorry. I love you.” Ask any wrestling fan who said those words at WrestleMania, and they will tell you it was Shawn Michaels. He spoke those words (making sure to make it easy for the viewers at home to lip read) moments before he delivered the one, final Sweet Chin Music that brought Ric Flair’s legendary 36 year career to an end at WrestleMania 24. Everyone was 99% sure that Flair was going to lose this match, he had been inducted into the Hall of Fame the night before, and at 59 years old, there was only so long he could maintain a glimmer of the standard he had set during his career. The match itself was a high quality affair, maybe at the time slightly over-rated due to the sentimental value involved, but definitely a match to warrant being called Flair’s last. It was difficult for me to choose between the Sweet Chin Music or Flair’s walk back to the locker room as the more distinguishable moment between the two, but I went for the superkick purely because it was an exact moment where something so special had to come to an end. The great thing is, I can’t think of another move that would have had the same effect. An emotional moment? Yes. A unique moment? Definitely. An immortal moment? Absolutely. 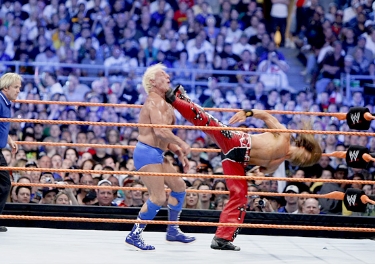 Bret Hart and Stone Cold Steve Austin did not like each other. They did not like each other going into WrestleMania 13, and they certainly didn’t like each other coming out of WrestleMania 13. But it was at WrestleMania 13 that one of the greatest matches in WrestleMania history took place, a match that ended with a WrestleMania moment for the ages. Stone Cold had actually gone into the match as the heel, with Hart still one of the company’s top faces. They fought in a submission match, a match favouring Hart and his devastating Sharpshooter submission hold, however the majority of the match was a wild brawl, during which Austin was busted open by a shot from a ring bell. As the match reached its conclusion, Hart applied the Sharpshooter to Austin in the centre of the ring. Austin had nowhere to go, blood was pumping through his body and out through the cut in his forehead. Unable to do anything about the hold he was in, but also unwilling to surrender to his bitter rival, Austin passed out from the pain and referee Ken Shamrock called a halt to the match. The image of Austin screaming in pain with blood running down his face into his open mouth has become synonymous with his career, as many see it as the point where Austin was elevated into megastar status. The aftermath of the match was almost as important as the match itself, with Bret continuing to attack Austin, signalling an unprecedented double turn, Hart becoming a heel for his actions, and Austin becoming a face for the courage he had shown. Not only does this moment capture the drama of a big WrestleMania match, but it can also be looked upon as laying the foundations for the Austin era.

Fun fact – If Shawn Michaels hadn’t “lost his smile” and surrendered the WWF Title the month before, it would have been a re-match of Michaels vs. Hart from WrestleMania XII, and this match would have never happened. 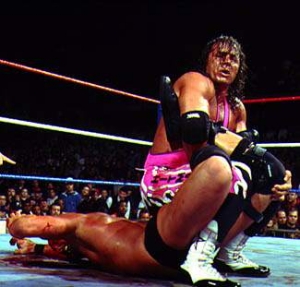 The scene is WrestleMania III. The crowd is recorded as being 93,173, a record for an indoor event at the time and still remaining the largest attendance for a North American wrestling event. The main event has come around, with the crowd having been already treated to a superb match between Randy Savage and Ricky Steamboat. But if you had asked any one of the 93,000+ in attendance what match they had come to see, they would have simply said “Hogan vs. Andre”. The match has been given the title of “The Irresistible Force facing the Immovable Object”, and it was a clash of the two biggest wrestling stars the WWF had in the 1980s. Hulk Hogan had been riding the wave of Hulkamania for 3 years, and had been WWF Champion for all that time. Meanwhile, Andre the Giant had gone undefeated (allegedly) for over 12 years. Andre was angered by the lack of respect given to his accomplishment, so he put a plan into action. Firstly he hired notorious heel manager Bobby “The Brain” Heenan, and then he gatecrashed an episode of Piper’s Pit and challenged Hogan to a match at WrestleMania for the WWF Title, attacking his former friend to further demonstrate his point. The big question that was on everyone’s lips was simple; could Hogan slam Andre? As the match came around, Hogan tried to pick Andre up for a slam on more than one occasion, but he was unable to muster the strength he needed. But finally, with the will of every Hulkamaniac in the building behind him, Hogan was able to lift the 550 pound Andre into the air and slam him down, causing the crowd to erupt with cheers. Hogan quickly added his patented leg drop, and covered Andre to win the match and retain his title.

I’m sure 99% of you know all that already, but I thought I’d remind you just in case. This moment defines WrestleMania in the eyes of nearly every wrestling fan around the world, and many consider it the greatest moment of wrestling history. And yet I haven’t put it at number 1 in my list. As I said at the start of this feature, the list you’re reading is very much based on my own personal WrestleMania experiences, and when WrestleMania III occurred I was just over six months old. It doesn’t mean as much to me as my number one choice purely because I wasn’t around at the time to understand its true meaning and its place in the history of the wrestling business. It would be easy for me to look back 22 years ago and say it’s the greatest moment of all time, but I would be betraying my actual belief. And you wouldn’t want me to lie, would you? 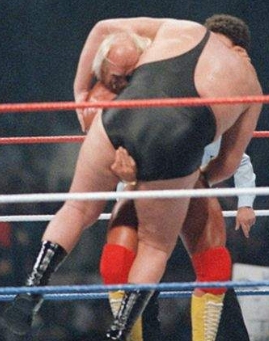 Some people will tell you that Chris Benoit was a psychopath. I’m not here to debate that, nor am I here to speak anything other than about my favourite WrestleMania moment. But Chris Benoit was my favourite wrestler, and Chris Benoit remains among my favourite wrestlers no matter what has happened since this incredible moment in wrestling history. When Benoit made HHH tap out at WrestleMania XX, I leapt from my chair in joy and adulation. My favourite wrestler had won the world title at the grandest stage of them all, I was allowed to be happy. But nothing could have prepared me for what happened when Eddie Guerrero joined his best friend Benoit in the ring following the match, holding the WWE Title he had successfully defended earlier in the evening. Eddie was my second favourite wrestler, and I had been just as happy when he defeated Brock Lesnar to win the WWE Title at No Way Out 2004. For the first time in my wrestling watching career, I was moved to tears as Eddie and Benoit embraced in the ring, before they raised each others arms, with the two title belts being held aloft as well. Being such a big fan of both men, I understood the sacrifices they had made to get to where they were, the problems they had faced in WCW because of the overbearing control held by the top stars, and even the lack of pushes they had received in the WWE before this moment. But their resilience and determination meant they had finally reached the top of the mountain, and I could not contain my happiness for their success. I shed tears again when I watched this moment on DVD, and my eyes still well up whenever I watch it again. Hell, they’re welling up now as I’m writing this. Only Ric Flair’s retirement party on RAW in 2008 has come close to bringing out the same emotion from me, and whilst Benoit’s legacy may have been tainted due to the unfortunate events that transpired in 2007, I will always be able to look back at WrestleMania XX and remember the positives of his life. And, no matter how much the WWE try to wipe his existence from their records, there is nothing that will stop me remembering him as my favourite wrestler. 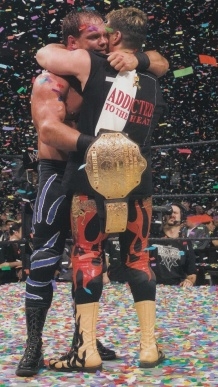 So there they are my personal favourite 25 moments from WrestleMania’s grand history. Hope you enjoyed reading them, and if you did, be sure to check out my PPV Reviews. If you didn’t, well you’re just mean.

Have a great WrestleMania peeps.