It’s that time of year again folks. You can call it the Superbowl of wrestling or the real grandest stage of them all, but WrestleMania truly is the biggest night of the year in professional wrestling.

As we begin the countdown to WrestleMania 26 we now identify WrestleMania as a truly epic monster. The huge arenas, massive crowds, elaborate sets and marquee matches, it really is the biggest show in every way, and a show which only the WWE can put on. So how did WrestleMania come to mean so much? And why is it so highly regarded?

Now you might think we’d go back to March 1985, as the first WrestleMania takes place at the famed Madison Square Garden. But I’m actually going to go back to November 1983. When I stated earlier that WrestleMania was the real grandest stage of them all I’m sure it created whiff of controversy, dare I say it, anger from long-time wrestling fans with a fondness for Jim Crockett Promotions. After all, the fact remains that in November 1983 it was Jim Crocket and the NWA who promoted the first major annual event in Starrcade, the brainchild of Dusty Rhodes, forecasting a new major league era of Pay-Per-Views and supercards. Armed with stars such as Ric Flair, Harley Race, Roddy Piper and Ricky Steamboat, the event was a huge success and was the first heavy strike by the NWA in their increasing rivalry with the WWF.

However 1984 became the year where the wrestling industry would grow even greater and the WWF would pull out all the stops to establish themselves as the number 1 promotion in America. They had acquired Roddy Piper and turned him into the biggest heel in the company, had entered a partnership with MTV beginning the Rock N’Wrestling connection and of course had began to build the company around the one and only Hulk Hogan. Their stars and attitude were creating mainstream waves and it was all building towards one event in 1985; WrestleMania. 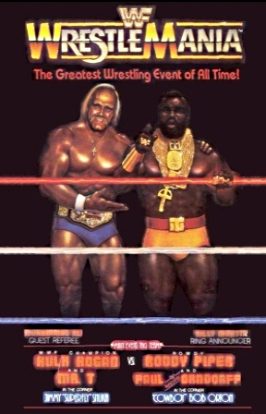 WrestleMania certainly wasn’t Starrcade. If you wanted great technical wrestling or bloody brawls, you were watching the wrong company. But WrestleMania had the biggest stars, huge celebrities of that era like Mr.T and Cyndi Lauper and a larger than life appeal. It was wrestling at its most glamorous and bombastic.

As the WWF powered on further, leaving the likes of the NWA, AWA and World Class behind, WrestleMania began to represent and embody the driven mentality and pioneering attitude Vince McMahon had developed. With the industry’s biggest star Hulk Hogan as the main attraction it enabled them to try new ideas, break new ground and open new doors. The show wasn’t just about seeing the big matches but about breaking boundaries, capitalising on their rapidly growing popularity and producing shows which were all about spectacle and awe.

As the 1980’s rolled on every Mania set a new precedent. WrestleMania 2 took place from 3 separate venues, enabling a larger live audience and was the first WrestleMania to be primarily available through PPV.  In 1987 93,173 people (or maybe a little less depending on conspiracy theories) packed out the Pontiac Silverdome to see Hogan and Andre the Giant clash at WrestleMania 3. That night not only proved the WWF could sell out stadiums but they could provide a show which had something for everyone. Even the staunch NWA fans, proud of their great matches and performers, would acknowledge the match between Randy Savage and Ricky Steamboat as one of the greats. So we now had a show with big stars in and out of wrestling, big stadiums, big matches of both magnitude and performance and big bucks too, with pay-per-view revenue at over $10 million.

A year later we were at the Trump Plaza Hotel to see the WWF title decided in a tournament featuring some of biggest talent of the time. And at the first Mania of the 90’s, we were outside the United States in Toronto, Canada to watch the first WWF PPV to be headlined by two babyfaces in Hogan and The Ultimate Warrior.

I believe it was these attributes which kept Mania important and relevant throughout the lean periods in the 1990’s. After the embarrassment of moving to a smaller venue for WrestleMania 7 and the last major stadium Mania in 1992, it would be 9 years until WrestleMania took place in front of a major crowd. But in that time they changed the approach to WrestleMania and again focused on special matches or attractions. WrestleMania 9 had the Roman theme for Hulk Hogan’s return; WrestleMania 10 returned to Madison Square Garden for a special triangle set of matches for the WWF Title and we witnessed the first ladder match on PPV. WrestleMania 11 saw NFL star Lawrence Taylor main event the show and 12 marked the beginning of Shawn Michaels reign at the top with his gruelling 1 hour iron man match against Bret Hart.

WrestleMania 12 was particularly important as it renewed another Mania hallmark; the confirmation of the new star. In 1988 we had Randy Savage, in 1990 The Ultimate Warrior and then in 1996 Shawn Michaels. WrestleMania was the time for the new star to reach the summit and take the company in a new direction. And after Steve Austin’s blood-letting ran all over WrestleMania 13, he was the new star to take over from Michaels at WrestleMania 14.

By now the WWE had began a new chapter with the Attitude era coming to the boil and Raw beginning to finally beat WCW Nitro. Austin was their new Hogan. WrestleMania 14 was arguably the first Mania since the glory days to truly herald legitimate mainstream attention with Mike Tyson’s role as the main event’s referee (and his earlier heated confrontations with Austin) being a major talking point. But WrestleMania continued to be trend-setting. WrestleMania 15 with Austin on top also contained a Hell in a Cell match and a McMahon competing for the first time.  WrestleMania 16 was then renowned for being the only Mania to feature just one singles match (The Kat vs Terri Runnels!) and also the beginning of the insane rivalry between Edge & Christian, The Dudleys and The Hardy Boyz.

However 2001 finally saw the return to the stage which it deserved. The big rematch between Steve Austin and The Rock was the draw and nearly 70,000 people in Houston witnessed it. This was also the first WrestleMania as part of a new era with no WCW and ECW. This, if anything, served to make the prestige of Mania even greater. It now represented the pinnacle of wrestling full stop, the night every wrestling fan looked forward to and every wrestler aspired to.

In 2002 we saw the return of Hulk Hogan in a dream match with The Rock in front of 68,000 in Toronto. 2003 saw Shawn Michaels’ first WrestleMania match since 1998 and Brock Lesnar defeating Kurt Angle in Seattle. We returned once again to Madison Square Garden in 2004 as the late Chris Benoit completed his 18 year search to become World Champion. In 2005, John Cena and Batista became the new big stars winning their respective brand’s championships. 2006 saw Rey Mysterio become the smallest man to ever win the World Title and in 2007 The Undertaker was winning major titles again like he did at Mania 10 years earlier, to extend his WrestleMania winning streak to 14-0. The event, which also featured Donald Trump shaving Vince McMahon’s head, also broke the WrestleMania buyrate record with 1.2 million buys. 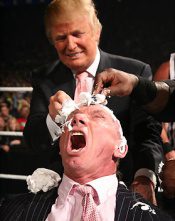 Recently we saw the emotional retirement (I know…I know) of Ric Flair and undefeated boxer Floyd Mayweather defeating The Big Show in 2008. And last year The Undertaker and Shawn Michaels turned back the clock to produce many more classic Mania moments.

If wrestling programmes throughout the year were a book then WrestleMania would be the climax to the book. The part where scores are settled and dreams are made. The Mania tradition is more than just a big stage; it’s a collection of WWE’s greatest hits. Hogan slamming Andre, HBK retiring Ric Flair, Bret Hart and Austin’s double turn, Tyson knocking out HBK, The Ultimate Warrior becoming the heir to Hogan’s throne, Austin defeating The Rock and many more pieces of wrestling history.  They are all part of a heritage held by no other wrestling event. It’s a legacy which will last forever and always give WrestleMania an authenticity and electricity no other event will ever have.

Think of it this way, if a non-wrestling fan friend or family member ever asks you “what’s WrestleMania?” what do you say?

To say it’s the big show of the year is true, but saying just that is missing so much. The spectacle, stories and grandeur make it the biggest night of the year for both wrestlers and wrestling fans. All across the world, it translates. Many wrestlers merely dream about just being able to wrestle at the show. Just ask the Ultimo Dragon, a man of supreme talent, admired by his peers, winning pretty much every major junior heavyweight title worth winning. What was one of his biggest goals? To wrestle at WrestleMania.

You can watch the likes of WrestleMania 1 and 2 today and say it doesn’t have the glamorous sets, the brilliant athletic matches and overblown build up with both TV and the accompanying hall of fame. But it still feels special. Hear the crowd as Mr T and Roddy Piper go at it as Hogan and Orndorff watch on. Feel the excitement as you switch between venues and different crowds at WrestleMania 2.  Even then they knew these were special times being created.

We may not have the biggest stars now or the most captivating television, but you can guarantee WrestleMania is worth watching. All the stops are pulled out by everybody involved, they’ll try and make the biggest matches, invite the biggest names and produce a show which not only sets out to amaze you but to get bigger and better every year.

While wrestling might not be the flavour of the month now, WrestleMania will always and forever be wanted and needed. It’s a special night which as the WWE spiel goes, is all about making memories and classic moments.

I’d recommend you all go and watch it, but I know you already will.