Hello my SSP peeps; I hope you all are well. It’s been an interesting month of developments since my last predictions, including the releases of some surprising names, unexpected NXT eliminations and a WWE Draft that has made Raw very strong and made Smackdown less appealing due to the network issues. Despite all the new developments, this months Over the Limit PPV is featuring 2 matches replicated from the previous 2 PPV’s. I am looking forward to both feuds ending this month so we can move forward with fresh feuds going into Fatal 4 Way.
Before I going into the individual match predictions I just want to give a little history session on the month of May in relation to WWE PPV’s, which I will be continuing to do for future prediction blogs.
May of 1995 was the first time we were all introduced to the “In Your House” PPV’s. 1996 and 1997 saw the month of May produce “Beware of the Dog” and “A Cold Day in Hell” while 1998-1999 saw May give us two “Over the Edge” PPV’s. “Over the Edge” 1999 of course was the PPV in which the unfortunate accident occurred involving Owen Hart and as a result, the WWE promised never to use the PPV Name again. May 2000-2009 saw ten years of “Judgement Day”, bringing us to present day where we say farewell to “Judgement Day” and hello to WWE’s Over the Limit. Let the predictions begin… 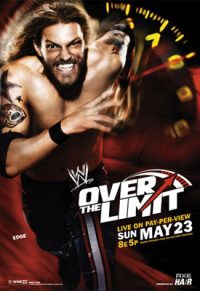 The 1st Annual from the Joe Louis Arena in Detroit, Michigan.

“Crash” by Fit For RivalsUnified Tag Team Championship
Chris Jericho and The Miz Vs The Hart Dynasty (C)
Chris Jericho teaming with The Miz is an interesting development that I can only assume will bring us numerous classic segments between the two. I do expect it to be short lived and hopefully escalate into a feud with the two, leaving The Hart Dynasty to possibly feud with another team. (I would have said The Colons, but now that Carlito has been released, who knows). For the time being I can only see a win for the Hart Dynasty, a loss here would only hurt their appeal while a loss for Miz and Jericho doesn’t damage them at all, it just gives them something extra to complain about.
Winners: The Hart Dynasty

SES Pledge Vs Hair
CM Punk Vs Rey Mysterio
The third PPV encounter for CM Punk and Rey Mysterio. This time around there’s a double stipulation with the Straight Edge Pledge Vs CM Punk’s Hair. I can see CM Punk winning this one. The segments that follow involving Rey Mysterio doing things against his will alongside Punk and the rest of the crew has great potential. Joey Mercury, who I believe is the masked man, will be the reason Punk picks up the win. This should cause Mysterio to join the SES and as a result start a new storyline resulting in Rey fighting for his freedom, possibly against Joey Mercury in the summer months to come.
Winner: CM Punk

Ted DiBiase Vs R-Truth
This feud has been developing over the last few weeks and to be honest I couldn’t be happier with the direction in which Ted DiBiase is going. The addition of Virgil is priceless (pun intended 😉 ) and should push Ted that little bit more while giving him his independence away from the whole Legacy thing. When the time is right he can step away from Virgil and take that extra step forward and start walking the same line Orton did to get where he is. Although I do like Truth, his entrance really annoys me, regardless of how over it is. In my opinion R-Truth is just a stepping stone for DiBiase. I am expecting a good outing between the two.
Winner: Ted DiBiase

Intercontinental Championship
Drew McIntyre (C) Vs Kofi Kingston
It’s nice to see the Intercontinental Championship being defended on a PPV again and between two future major stars in my opinion. The heat that Drew received on Smackdown last week was brilliant. Very well done, I feel at this point though all the heat is on Drew and he has held the championship long enough. On the other hand, Kofi has held this Championship before, and you have to ask what benefit it will have in him holding it again. This one could swing either way but I think I’m going to swing it Kofi’s way. It’ll spark a rematch which should stretch this feud out a little longer.
Winner: Kofi Kingston
Randy Orton Vs Edge
My favourite match on the card and in my opinion, the hardest to predict. Regardless of the result, I can see the two going on to the Fatal 4 Way PPV to battle against John Cena and Sheamus for a Title in a Fatal 4 Way match. If Sheamus doesn’t end up on the card I can see him getting involved in either this match or the Championship match between Cena and Batista. Sheamus being heel could see him going for Orton and handing the match to Edge. He may even come out and destroy both of the boys causing the match to go to a no contest, which would really get him some heat. This one really is hard to call, Randy was on a roll up until last months Extreme Rules and Edge defeated Jericho after losing to him at WM. The momentum has to swing one way and if Sheamus is to be a factor then I have to lean towards Edge. At this point I think Randy has more momentum behind him than Edge does.
Winner: Edge

Divas Championship
Eve (C) Vs Maryse
Eve seems to be on a roll lately and only recently after taking Maryse off her perch. I can’t see the roles reversing again anytime soon. Eve and Maryse have this little Martial Arts feud going on which I expect to be portrayed in this match with Eve coming out on top.
Winner: Eve
World Heavyweight Championship
Big Show Vs Jack Swagger (C)
Swagger put on an impressive performance last month at Extreme Rules against Orton and I expect it to continue this month. Taking the title off him so quickly would only put him back down the card before he cashed in his MitB. In my opinion the WWE realise that Swagger is a great all rounder and can put on a great match with most of the Superstars he gets in the ring with. The Big Show is going to be a great test because there aren’t that many Superstars who when against the Big Show can put on a great match. Not taking anything away from the Big Show, that’s just his style, I know there’s not many people who like Show’s work but compared to the other big guys around, The Big Show is one of the best for his size.
Winner: Jack Swagger

WWE Championship – I Quit Match
Batista Vs John Cena (C)
The Unstoppable Force Vs The Immovable Object Part 3. Hopefully this feud will come to an end. With the stipulation in place and the never ending rumours claiming Batista’s departure following this match, it’s pretty much a foregone conclusion that John Cena will retain his WWE Championship and send Batista packing so he can go make his movies… Good luck with that Dave. I am really looking forward to this evening so Cena can feud with all the big names now appearing on Raw.
Winner: John Cena

The segment between Chris Jericho and Bret Hart was one of the better segments in recent weeks.

* The possibility of MVP once again turning Heel on Smackdown. I don’t believe the face MVP ever took off.

* The Releases of Mickie James and Shelton Benjamin.

A lot of factors come into consideration to summarise the SSP Top Ten:

Basically I’m ranking them on the current card position, what they are doing for the company and how entertaining they are.
Previous positions are in brackets…

Nice write-up and analysis here..The fact they have so many titles up for grabs on this OTL PPV makes you wonder which one changes hands, if any…
I agree with almost all your picks…I have McIntyre and Rey winning, but I can see your analysis too, that the mystery guy costs Rey the win. If Kofi wins, won’t Drew just have the match nullified by Vincent Kennedy MacMahon? lol
Enjoy the show!

Quote of the week by far: It’s called the swaggie, It’s Delicious…Tastes Like Freedom!

I want to know when you will post your Fatal Four Way PPV predictions…we are just 13 hours away from F4W PPV to start.
Hurry Up Dude !!

I think WWE made it far too obvious that John Cena was goingn to be winning again.