WEEEEEEEEEEEEEEEE!!!! We are registered at Highspots.tv hahahahah not reeeeally but but it sounds better then Bed-Bath & Beyond! Although you (the rasslin’ universe) can check out the Breakfast with Stacy Carter & Sinn Shoot Interview is available on Highspots.tv (shameless plug!!!)… If you wanna get me anything for a wedding present… a job at TNA or WWE would be lovely! I gotza to pay for a diamond ring you know!!!

Bryan Danielson WTF??? I don’t know what to possibly say about Danielson’s release… What a freakin waste!!!! Best of luck to Bryan even though he won’t need it with being undeniably one of the best wrestlers on planet Earth! Kaval aka Lowki wearing a Lay-Cool pink sparkly shirt??? WTFagain? I hope he Warrior Ways his way outta that apparel! Danielson & Kaval have had some of the best matches I have ever seen and it is toooooo bad that won’t happen in the near future at NXT…

Stupid-ass name changes is what’s NXT!!! So the next thing on my mind is how and why Joe Hennig the son of Mr. Perfect Kurt Hennig has had to go thru what a lot of WWE two-legged products go through: The WWE copyright owned name change? Michael McFreakinGUILICUTY?!?! That is about as ominous as Richie-God-Darned-Cunningham!!! YOU the there-in mentioned two-legged product belongs to Uncle Vince for all eternity! First it was Colt Cabana tubbed Scotty Goldman.. Atlas DaBone became Ricky Ortiz… Sinn Bodhi became KiZARNY (Vince must have been hittin’ the peizipe that day!?)… Matt Siedel became Evan Bourne… Air Bourne is a cute play on words I suppose BUT ‘EVAN’??? That will definitely strike fear into the hearts of his opponents!!! Run for your life EVAN is after you!!! Bourne & Jericho have been having awesome matches btw! Dolf Ziggler? Maybe that is better than his original handle, Nicky of the Spirit Squad… But why can’t they give these guys awesome larger-than-life names like the Sabastian ‘Iron Sheik’ Slater or Brutus ‘Daren Walsh’ Beefcake or The Junk Yard Dog Tyson Tarver or Moondog Jack Swagger? Jake Hagar is Swagger’s real name which I think is waaayyyy cooler (maybe a tad Viking-ish but waaaayyyy better!) Maybe they named Lucky Cannon because he did okay on the casting couch?… Ohhhh what about Husky f**ckin Harris??? Husky Harris aka Windham Rotundo is the legit kid of IRS Mike Rotundo & nephew to Barry Windham & Grandpa BlackJack Mulligan for cryin’ out loud!!! Is it such a stretch of the imagination that the WWE can’t name the poor guy BlackJack Junior or Husky Mulligan or— and this next one is reeeeeally reaching— Windham Rotundo!?!? WWE is on their 2nd & 3rd generation kick soooo why not let the wrestling royalty carry their own names?…

As far as want has stood out in my meizind… As much as I am an A-Team fan I pity the fool that watched the A-Team stuff on Raw! Just when you have all the answers, I change the channel! Big Show & Swagger is a fun battle to watch cuz both guys are huge but polar opposites! Abyss going kook kook for Koko B. Ware Puffs and destroying Jeff, The Asshole and The Hulkster sure makes TNA intriguing with such a monster heel on the loose! Sheamus winning his strap again (WWE hates when you call it that btw) back during the Fatal 4 Way PPV was excellent! Sheamus has reeeeally upped his game since FCW and belongs in the main events with Cena, Edge & Orton! And I love that Sheamus is soooo white he makes Kevin Thorne look like Wesley Snipes! Jay Lethal freak out Woooooooo freak out wooooooooo is God!!! I think the sneaky-snooper-cam backstage at TNA is a very cool way to differentiate from WWE.  CM Punk should have all his hair grown back by the time his mask comes off! Hey did you guys all see the gash in the Half Pint Brawlers head?! It looked like a big ol’ vajayjay!!!

Some of the ridiculous things that have happened in my life in the last few days…  Stacy & I saw NXT Star David Otunga in the passport office in Tampa so I yelled over the crowded room to him, “Are your wrestling skills that bad that the US Government is kicking you outta the country?!” He smiled and confessed that I had figured it out!!!

Last week in Miami my lovely fiancé’ & I were doing a signing at the Florida Super Con… After a fun first day of meet & greeting YOU the rasslin’ & comic book & sci-fi universe we headed over to the hotel bar and had some laughs with a shmorckussssssborge of fellow signing guests! The Nasty Boys were nasty! The Iron Sheik & I discussed Persian cuisine & then he called me a jerk! Master Shake illustrated his version of how Stacy & I hooked up! The guy the does the voice of Liono from Thundercats fought with the kid from the Chucky Movies over who would buy the Nasty Boys drinks! Some broad from Battle Star Galactic picked a fight with Knobs which was awesome! Terri Runnels & Stacy Carter arm wrestled! New Jack was the ref! The Soup Nazi from Seinfield & Fred ‘The Hammer’ Williamson entertained us all with road stories and the Nasty boys were like big nasty kids at a camp fire! Richard Horvitz (the voice of Invader Zim) stared at Tracy Brooks boobs & SoCal Vals too until Chris Harris dropkicked him! Tia Carrere, Captain America  & The Flash mistook TiTan (The Worldz Giantest Midget) & Tweedle Die (The Worldz largest Love Machine) for Chewbaka & Miss Piggy! The only Dynamite Death Monkiez member absent from this insanity was Blindseed The Worldz only blind stuntman… I’m sure if he had been present Tia would have mistaken him for Ray Charles or the guy that fired Bryan Danielson! The Kevin Nash serenaded Richard Roundtree (the real Shaft) and just as Big Kev was taking it home with, “he’s a bad mouthaf—“ Mr. Roundtree sang back ,”Shut your mouth!” 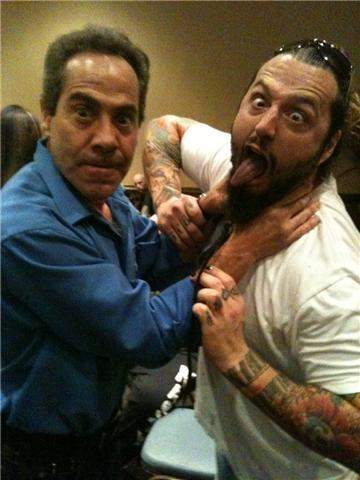 This past Friday I was very proud to produce a wrestling show in Fort Myers with the MAKE A WISH FOUNDATION & NWA Florida & CCW which was a great success! The Everglade Skunk Ape broke out of his cage and bit TNA Knockout Rosie LottaLove in the ass Sharkboy –style! The local Little League Coach Charlie Whitehead saved the day as I was about to turn the hometown boy’s life into a 3 ring circus! The mainevent  3 way featured former WWE star Bam Bam Neely vs TNA Star Jesse Neal & CCW Champ Marquis Youngston which was great and all the kids loved it! We are gearing up to do our return show Friday September 10, 2010! So stay tuned for updates!!! 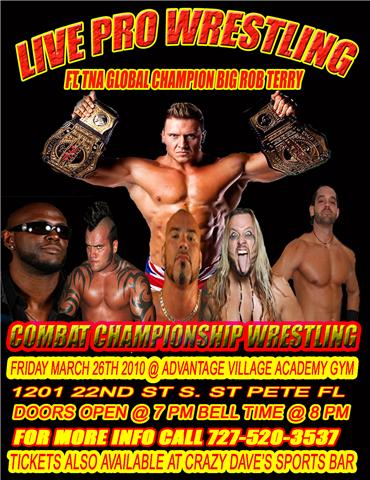 Please send me comments, questionz & hate mail! I just thought I’d let you know what was on my meizind!!!…
SiNN Bodhi ‘The Kizarnival freak’
Myspace | Twitter 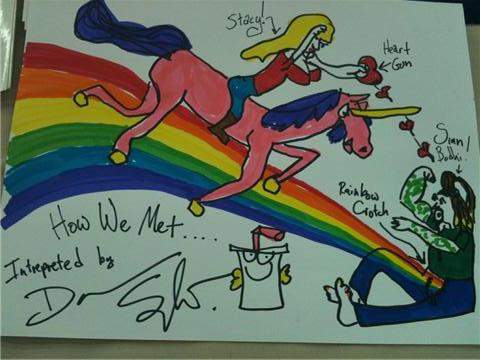 So happy for you and Stacy!

Evan Bourne may not be a really scary name but it’s still more intimidating than something like say…Matt Sydal.
Congrats to you and Stacy too and thank you for proving that even us freaks can end up with the hot girl sometimes.

Congrats, all the best to you and Stacy. Gonna have to get my hands on the Shoot Interview, looks pretty interesting.