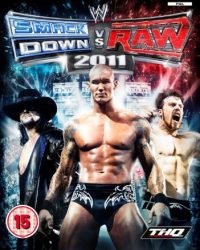 Let’s kick this shindig off, shall we?

With just under 20 days (23 for us in the UK) until the highly anticipated next step in the evolution in WWE video gaming hits store shelves for you to paw over, I had the opportunity of popping into the centre of London for an exclusive opportunity to try out the game for myself.

Ever since E3, where we got our first glimpse of SvR11’s new physics engine in actions within the confines of the Tables, Ladders & Chairs match, I’m sure I speak for everyone when I say that our minds were racing with new ideas for impressive spots to execute in order to wow the virtual crowd and put a hurtin’ on our virtual foe.

After a few minutes becoming acquainted with the updated control system, I got stuck in with a epic TLC match pitting the awesome Miz against “Dashing” Cody Rhodes. Being a fan of both of these Superstars, I found it hard to choose which one I wanted to play as more… Eventually, I chose the two time United States Champion over the 4 time Tag Team Champion.

Amazingly enough, Cody had his “Dashing” Smoke & Mirrors entrance theme (Yes, this was confirmed a few weeks back, but it’s still amazing) to accompany him to the ring, The Miz strode to the ring with his signature cocky swagger. When the bell rung, we had an all out battle to claim the briefcase for ourselves with wood flying, chairs breaking, and bodies being broken in half by God! (To the sound of Michael Cole & Jerry “The King” Lawler in all arenas, due to the fact that the announce teams were in a state of flux, with J.R’s departure, ECW’s removal and such).

The new mechanic to take down the item is a welcome addition, replacing the slow meter with a pulling system. You hold the right stick up to grab the item and wait for instructions to pull, where you flick the stick down to pull the item down. Usually this takes five to seven attempts to achieve victory, so it actually looks like you’ve won convincingly, and not like Jack Swagger taking hours upon hours to unhook the case at Wrestlemania 26.

One major highlight for me was watching Cody completely miss his grab for the case, fall straight off the ladder and fall right through a table. I’ve read many people say that this type of breakable table action was available in other WWE games (Day of Reckoning springs to mind) but I don’t ever recall that happening!

With the match won, I was treated to selected replays from the match courtesy of the highlight reel system. Unfortunately, the clips selected were only the last few big moments of the match, rather than the best bumps and spots of the match, and a few of the spots cut off before the actual end.

In saying that, the new physics work rather well for spots like these and a lot more besides, because it’s not just tables and ladders that are affected by this new system. It’s chairs, it’s sledgehammers, it’s the ring steps, it’s every weapon in the game! If I choose to, I’m able to hook someone up in the Skull Crushing Finale, and smash my opponent’s face into a ladder or onto a championship belt, with extra damage being piled on, because let’s face it, stuff like that hurts big time!

Following that, I delved into the Create a Wrestler mode. I won’t lie to you and say that it’s vastly improved, because it’s hard to improve something that’s damn near spot on in the first place. There’s a reason why it’s the most intricate create a character system in any game. Personally, I always look forward to seeing the new items introduced into the mode, because I have been known to spend a lot of time just creating stuff for my game.

What I can say about the CAW mode aside from listing everything new I saw, is that it’s a lot less cluttered. Some categories have been merged with others so things look a little less cluttered. Also, the graphics are better… But that’s a given, right?

In other creation feature news, there is the new corner finisher situation where… Well, I don’t know really… Nah, I’m just kidding. I spent quite a lot of time here perfecting one of those moves where you just have to go “DAMN!” I won’t spoil it for you, but it’s a hell of a finisher…

Talking of creating new things, there was a rumour floating around from Cory Ledesma that there were 100s of new matches in this game. Then Marcus Stephenson said there is only one new match type… Confused? Well be confused no more!

Match Creation. Yes! In addition to all of the matches you’d expect from the Smackdown series, THQ go and pull this out of their hat! For example, if you have a feud that has been particularly violent and you want the ultimate way of settling it, why not settle it inside Hell In A Cell… With Last Man Standing rules! Or a flaming tables match? It’s in your hands! 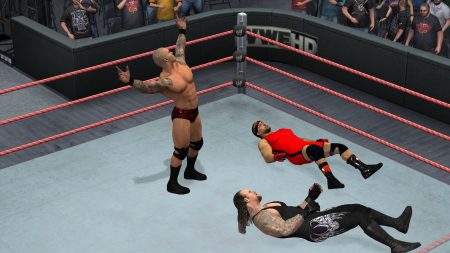 And capping everything non-Universe off, Road to Wrestlemania returns with a JRPG twist! Rather than have Road to Wrestlemania being all cut-scenes and matches, THQ and Yukes implemented a free roam backstage environment so you can really get to grips with what it’s like being a WWE superstar.

For example in the “Vs. The Undertaker” Road to Wrestlemania, I played as John Morrison who encountered an agitated Kane in the parking lot. Kane was rambling on about how things never change regarding the Undertaker’s legendary Wrestlemania streak of 18 wins and no losses. I quickly got sick of Kane and goaded him into a backstage fight, where the main aim is to beat down your opponent and knock him out.

In all, it’s much more interesting than being told what to do via cut scenes that lack interactivity. It also adds an extra edge because you get to hear what other superstars are thinking about what is going on, instead of it just being from the perspective of your character, the announcers and how you perceive the angle. It’s really refreshing. 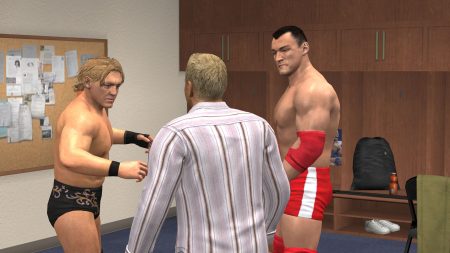 In saying that, it’s a little odd that the lip-synching is off, and some movements are exaggerated in the typical JRPG style. But it’s cool and something we haven’t really seen since Smackdown 4.

Now for the meaty part of this game. The Universe mode. Out of the 6 hours I played this game, Universe is where I spent most of my time. It just works so you don’t have to do a thing. It simply works! When I booted into Universe for the first time, I was presented with the card for Monday Night Raw where matches were made. You could play all or some of the matches in any order you want. I decided to play the main event of the WWE Champion Randy Orton against Sheamus in a nontitle Falls Count Anywhere contest.

It didn’t take long for Randy Orton to get jumped from behind by a furious Sheamus, who quickly nailed the High Cross onto the steel ramp and cover him for a quick victory. It’s a real game changer when a cut scene kicks in and adds a fresh stipulation to the match. Sure, it may have ended in quick time, but it was because Sheamus blindsided Orton!

Another example is that I brought Drew McIntyre over to Raw from Smackdown so I could put him in the United States championship hunt. It wasn’t long before Drew and Evan Bourne had a number one contenders match to determine who’d contest for the belt. I had Drew thrash Bourne before delivering the Future Shock DDT (Which is called the Scot Drop by the announcers) for the victory… Or so I thought.

Vince McMahon strutted out with a microphone and told me not to go anywhere, because I had another opponent in the shape of the Moscow Mauler Vladimir Kozlov. Instead of laying down and quitting, I had Drew defeat him too, to become the official number one contender.

In addition, the commentary is really improved in this mode. The announcers acknowledge drafts, they react to certain rematches, they refer to Championship rankings too, it’s all a vast improvement from the stale commentary that we all had to turn off in previous years titles.

Finally, Story Designer was a feature introduced in last year’s game to fulfil the wishes of the masses of WWE fans who wanted to create their own storylines with actual cut scenes . This year, it’s remained largely the same, very intuitive, but with “a buttload” (Bryan Williams’ words) of new scenes for us to use, including Undertaker specific scenes. It’s actually worth buying a separate USB keyboard to run through the mode with, to make it easier to type out the subtitles.

Overall, this game is a must have and personally I think it’s going to be a No Mercy beater. Sure, it’s a big claim, but all the tools are there. It’s time for Smackdown Vs Raw to shine over the rest of WWE Videogaming.

Look out for our review soon! 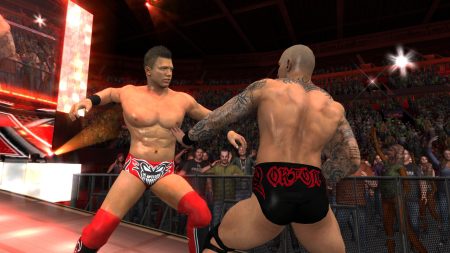 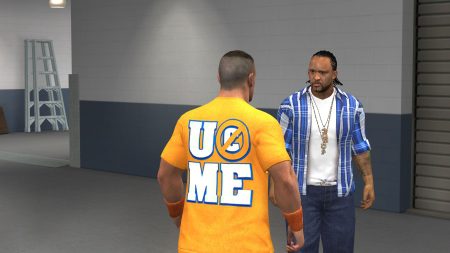