Did you know Vince McMahon Jr. BEFORE he was the owner of the WWWF/WWF/WWE put a hell of a lot of money into the PPV broadcast of Inoki v Ali?

It bombed worse then the XFL, Brawl for All and Billy Gunn.

Right last time I looked at Pro Wrestling NOAH and this time I am going to look at another promotion… it was going to be Dragon’s Gate but their history is sort of wavy and up and down and well… odd.

So I decided to take the easy route as I am a bit under the weather and do NJPW or New Japan Pro Wrestling to those who don’t want to try and guess what those letters mean.

First of all without one man there would be no NJPW, he was the founder, top star for ooohhh…. 18 years and the first (whatever Hogan might tell you) IWGP World Champion.

That man is Antonio Inoki.

He was a Japanese immigrant to Brazil and was Brazilian regional champion is Javelin, Discus and Shot put. He then went on to become a national champion is the Shot and Discus as well. Also a student of Karate he met an impressed Rikidozan at the age of 17 (this being 1960) he returned to Japan to become a member of the JWA roster.

He trained in the same Dojo class as All Japan founder and legend ‘Giant’ Baba and he would be forever in his shadow whilst in the JWA. He left in 1966 because of this and was part of Tokyo Pro Wrestling in 1966 however this went under and he came back to form the B-I Cannon with Baba and was a multiple tag champion.

However he wasn’t happy with this and decided to try and take over the promotion, plotting and planning behind the scenes to take the promotion away from its current management. Who found out… and fired him in late 1971.

So in 1972 he made his own promotion, New Japan Pro Wrestling with of course, Inoki as the top star.

In his first ever match he actually did the job, to Karl Gotch who is regarded as the daddy of Pro Wrestling style in Japan. Then he brought in a mixture of young stars, Americans and mixed martial artists to try and show the company motto was in fact true – ‘Pro Wrestling is the strongest’

To this end Inoki fought Ali in 1976 in what was supposed to be a ‘worked’ match. However Ali saw Inoki’s skill at grappling and decided that the idea of beating down Inoki for 12 rounds till he was bloody before appealing to the referee to stop the bout before being ambushed, well he decided it was dishonest and a lie which he could not do to the fans….

So he wanted a worked match with no suplexs or holds allowed… basically the greatest boxer ever in a striking contest with a man who has done some Karate.

So Inoki stayed on his back all match, Crab like on the floor and kicking at Ali’s legs. Ali landed a total of six punches all night, was given a blood clot in his leg, drew the match 3-3 (how that was worked out no one knows) left without a press meeting and was paid nowhere near the six million US dollars he was promised for the fight.

Not to matter to NJPW and Inoki however, he – a pro wrestler – had just drawn with Ali in a straight shoot fight. It was the beginning of the Inoki legend.

But come the 1980’s Inoki needed something more. So he hired Hulk Hogan… and lost to him via count out after ‘swallowing’ his tongue following an Axe Bomber in the final of the IWGP World League. 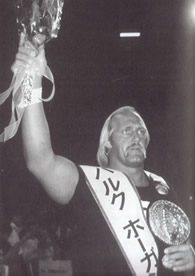 This is where Hogan along with some other people thinks he became the first IWGP Champion… he didn’t, the winner of the league did get a belt, a trophy and some money, but this belt was not an official title. It was just a symbol to show that you were in fact the IWGP League Winner of the previous year and the finals of this and the later tournaments in 1984, ’85 and ’86 were not promoted as title matches at all. So Hogan, sorry you where NEVER a IWGP World Champion, let alone the first ever one.

He also began to promote cutting edge Junior Heavyweight action with the legendary series between the original Tiger Mask and the Dynamite Kid. It was WAY ahead of its time, the matches even now stand up to the hype and todays standards of action and led the way for the era in the 90’s where Liger and the rest became HUGE stars.

But Inoki that his company was running using other peoples titles instead of their own. The NWF title, held numerous times by Hansen, Inoki and Tiger Jeet Singh was not an actual NJPW title. Their alliance with the WWF and the NWA later on had not given him a world title and so they created one with the winner of the 1987 IWGP League becoming the first IWGP World Champion… this remember is 1987 NOT 1983 which Hogan claims…

Of course Inoki won the league and became the first champion defeating Masa Saito in the final to win. He held the title for the first and only time for nearly a year before breaking his left leg.

After this he decided to push Riki Choshu and Fujinami as his successors with Fujinami becoming the second champion in another tournament final, defeating Big Van Vader.

He has previously allowed Fujinami to be the become one half of the first IWGP tag champions in 1985 by pinning him with the Dragon Suplex and now he wanted right out of the title picture, preferring instead to hold special matches against Vale Tudo and MMA fighters.

The G-1 Climax and Three Musketeers

In 1991 in an effort to help build more stars the promotion introduced the G-1 Climax and it was in this very year that it did just that. Hashimoto, Chono and Muto topped the twp blocks which also consisted of Bigelow, Vader, Norton, Choshu and Fujinami…

Chono and Hash where locked on 5 points apiece and collided to decide the winner, Chono making Hashimoto tap to an STF before advancing to the final where he defeated Muto with a powerbomb to become the first ever winner.

Afterwards all three stood in the ring, arms aloft and proclaimed themselves the future of the company – they weren’t wrong.

The tournament became the pinnacle of the summer for the company and Hashimoto, Chono and Muto would all enjoy IWGP championship reigns at World and Tag level, sell out the Tokyo Dome many times and launch NJPW to the top of the three.

They also founded a version of the nWo in Japan (Chono) and also feuded with the UWFi over the IWGP title which again sold out the Dome.

But this had to end, the next generation needed to be blooded and to gain some wins…

Choshu by this time has stepped back as a full time wrestler and was now a booker and wanted to push his friend and pupil Kensuke Sasaki as the new ace of the company. Sasaki won the 1997 Climax, defeated Hashimoto for the title and then Chono and Muto in his first two defenses… He also won the G-1 Climax in 1999 whilst he was IWGP champion, a feat that only Muto had done before.

Chono came down with a serious neck injury and Muto had began to suffer issues with his knees. Sasaki as a result was at the top but his fellow generations members (Tenzan, Kojima, Nakanishi and Nagata) were stuck.

The start of a rocky road

Then the decisions from the office got a little silly.

Inoki by now was firmly fixed in his idea that NJPW should pretty much be a worked shoot company with fighters who wrestled ‘shoot style’ on top and company talent pushed into REAL fights in K-1 or PRIDE to gain popularity with him and his people in the office.

Choshu who had led NJPW to its most successful period ever both in terms of gate, acclaim and income was replaced as booker and the plan went ahead.

Kendo KaShin and Naruse, men who had either taken part in shoot fights or shooting companies wore the IWGP Jr. Gold despite being pants.

Fujita and Yasuda like wise with the IWGP World Title and then later Takayama, Bob Sapp and later Fujita again.

Tokyo Dome shows where spilt into kick boxing and worked shoot cards run with pro matches as an after thought.

The companies brightest star that was coming through, Nagata, was forced into a match with Mirko Cro Cop, then the MOST feared MMA artists around… he lost in around 62 seconds. He later recovered and became the most successful IWGP champion ever, breaking Hashimoto’s defense record before Fedor of Pride fought him and battered him in around 50 seconds in another shoot match after he had lost the title.

Kojima, Muto and KaShin left for All Japan due to this, as did Choshu and Sasaki. Established wrestlers such as Tenzan, Nagata, Nakanishi and the up and comers in Nakamura and Shibata were fed to MMA workers all to decreasing gates, the expense of the titles prestige and of the reputation of the workers and company itself.

Kojima who has long been held down later became Triple Crown champion in All Japan. Sasaki is now a free lancer who has fought in NOAH, AJPW (Triple Crown and All Asia Tag Champion) and again in NJPW where he won the IWGP title again.

But it was too much for the company to handle. The Dome shows where no longer pulling 64,000… instead they where pulling around 30,000 paid at best, most believe even that was lie. They where in the red, their TV deal was threatened, the prestige of the title was in tatters and workers like Tenzan had their own reputation shattered by abortive pushes, title reigns and crashing defeats…

Something had to change. Found out what next week when I will cover the latest history of NJPW (2003-Now) and the rise and influence of the Junior Heavyweight scene it spawned in the late 80’s….

Till next time Puro Heads.

Note: I’ve posted a news update on the newsboard.