Why does the WWE offer free rehab to all wrestlers employed by WWE and/or formerly employed by WWE but do NOT offer free shrinks to support these very same lost souls??? That being said we might still have people like Kanyon, Benoit, Von Erich etc still breathing and enjoying their families and their jobs today! In all seriousness rasslin’ universe, please think about it for a minute from a wrestler’s perspective.

You don’t get fired from McDonalds and then become a wrestler as the next job available to pay the rent with. Wrestling is a boyhood (or girlhood) dream kinda-thing. When you’re a lil kid you wanna become a fireman, race-car driver, astronaut, rock star, super hero, baseball player etc…and the reeeeally kooky ones wanna become wrestlers!  Soooo…years later you follow your dream, put your body thru hell, piss off relatives, starve, miss birthdays and anniversaries, go through nasty break-ups, have psychotic fans murder your dog when you don’t return their love, take god-knows-what so your body has an abundance of muscles to fill out your spandex, pills for the pain, booze and debauchery to fill the time away from home, etc etc etc ETC ETC ETC!!!

You (as a wrestler) willingly give up soooo much of yourself to follow your dreams and to have the courage-and-or-stupidity to TRY! It is easy to bad mouth any actor, athlete, musician or wrestler that you see on TV or in a magazine because you view them as a product void of feeling—- “This guy sucks!’ or “I hate her!”— But all performers just like the fans that make us real have feelings. And when the WWE sends you on your future endeavours your dream is destroyed and your mind races with awful thoughts! Wrestlers are not like plumbers, strippers or lawyers because when they get fired they can seek work at other hardware stores, strip clubs & law firms! With wrestling there is pretty much one game in town and Uncle Vince owns it and the souls there-in! A monopoly is a dangerous toy much like a dictatorship or a Blumin’ Onion from Outback! So thank god for TNA, Japan, Mexico and the scattered spatter of indy wrestling shows across the world. But even those only house so many wrestlers at a time and most struggle and starve even after they have sold out Madison Square Garden!

I have had countless conversions with wrestlers that have been released from WWE and some of the thoughts they shared were chilling. What they had contemplated was horrific, I will admit to have had a disturbing thought or two or three since my release from WWE. I truly love wrestling and have ever since I was a boy just like every other wrestler. I believe wrestling to be an impossible art for anyone who doesn’t truly love it.  Other wrestlers sometimes pull rank and torture their own as a means to share their pain and experience in loving something that has eaten away at them over the years. I believe that sorrow would be of better use if heard by the ears of a professional psychiatrist instead of taking it out on themselves or on loved ones!

Wrestlers also have an unfailing way of finding ways to be disgruntled even when something like this is written for their benefit. So to bluntly say I mean every word with utmost respect and good intensions! Going through so many drastic highs and lows is hell on the brain and far outweigh the permanent physical injuries the wrestlers endure. 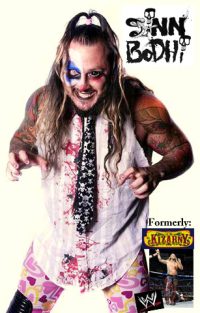 Please send me comments, questionz & hate mail! I just thought I’d let you know what was on my meizind!!!…

5 replies on “Is there a doctor in the house?”

I know what you mean. But still, we can’t deny the fact that WWE is offering a good serivce by offering former wrestlers to go to rehab. It’s pretty much like a second chance at life. I’m not sure what more they could ask for something that’s free.

I know what your saying, but you knew what you were getting into when you choose this profession. Should WWE yes, should they be forced to (as Raven would say) No.

Those were the most inspiring words I’ve heard in a long time.
🙂

Thank you, for taking the time to do these blogs.
Every time you write something, it is filled with great knowledge about how wrestlers live, and what not. Not many wrestlers do what you do. So I thank you alot for sharing.

Sinn, I’m glad you had the guts to write this. It needed to be said. Yes, wwe are starting to think of physical problems (like rehab, drug testing, etc.), but no one’s mentioned the mental/psychological issues. I don’t know what it’s like in the US, but in Australia, even relatively pain-free jobs come with opportunities for counselling or psychological assistance. Yes, wrestlers know what they are ‘getting into,’ but that doesn’t mean that they should suffer, or even die for their art. They have a right to adequate care, just like anyone else. Keep up the great ideas Sinn/Fatty. 😀