The Royal Rumble is a week away, one of the only PPV’s each year that I consider ‘must see’, having kept the original concept throughout the years (unlike the Survivor Series, which used to be ‘must see’ and is now ‘sh*t’).
The annual 30-man over-the-top-rope battle royal is always fun to watch, even though you never see any moves or actual wrestling, instead an over abundance of punches, chops and cartoon over-selling (see: every Shawn Michaels match since 2006).
Pat Paterson gets his pencil (take it easy!) ready every January and lays out the match from start to finish, including entrance and elimination order, who throws out who and how it all goes down (saucy”). Patterson is heavily credited as the guy who came up with the idea in the first place to have people come to the ring (steady!) every 2 minutes etc. Well done Pat”pat on the back for you (watch it!).
I thought it would be an idea to look back on the first, way back in the days where Vince didnt care who won (Jim Duggan and John Studd winning the 1st and 2nd, respectively).
The first Rumble took place free on the USA network back on January 24th, 1988 in Ontario Canada I believe, and involved 20 men over the usual 30. For years this event was VERY hard to get a copy of, never released by the WWF/WWE on home video or DVD until very recently, we all had to deal with poor video copies or our first gen versions we taped ourselves from TV. The event held several matches and also the Dino Bravo strong man challenge where he obtained the WORLD RECORD quite legitimately, may I add, by bench pressing about a gazillion pounds with zero help from Jesse Ventura.
I also have fond memories of the Hulk Hogan vs Andre the Giant contract signing for a WWF title match to take place the following month at Market Square Arena in Indianapolis, IN on Saturday Night”s Main Event which was the infamous match with the twin Hebners where Hogan lost the title in front of a record WWF TV audience of over 33 MILLION! (Eat that figure Austin, ha to you”ha!)
The fond memories don”t come from the contract signing activity itself, but from Hogan walking to the ring wearing sky-blue tie-dye spandex, I remember thinking “Oh man, those are cool!” God bless the 1980”s, how I miss you”please come back soon, with your Zuba”s, slap-snap bracelets, spiked mullets, LA Lights and Duck Hunt.
Stealing some info from Wiki, here are the results from the first Rumble:
”¢ Ricky Steamboat defeated Rick Rude by disqualification (16:40)
o Rude was disqualified after pulling the referee in the way while Steamboat jumped off the top rope.
”¢ The Jumping Bomb Angels (Noriyo Tateno and Itsuki Yamazaki) defeated The Glamour Girls (Judy Martin and Leilani Kai) (w/Jimmy Hart) in a Two out of three falls match to win the WWF Women’s Tag Team Championship (15:21)
o Martin pinned Yamazaki after a Alley Oop (6:06)
o Yamazaki pinned Kai with a sunset flip (8:21)
o Tateno pinned Martin after a Double Missile Dropkick (15:21)
”¢ Jim Duggan won the 1988 Royal Rumble
o The final two participants were Jim Duggan and One Man Gang. Duggan won the match when he ducked One Man Gang’s charge sending him over the top rope. (33:00)
o Nikolai Volkoff came out prematurely right after Don Muraco, and had to be forced by referees to stay outside the ring before his time is up.
”¢ The Islanders (Haku and Tama) defeated The Young Stallions (Paul Roma and Jim Powers) in a Two out of three falls match (14:00)
o Roma was counted out. (7:00)
o Haku forced Roma to submit with a Single Leg Boston Crab. (14:00)
Royal Rumble entrances and eliminations: 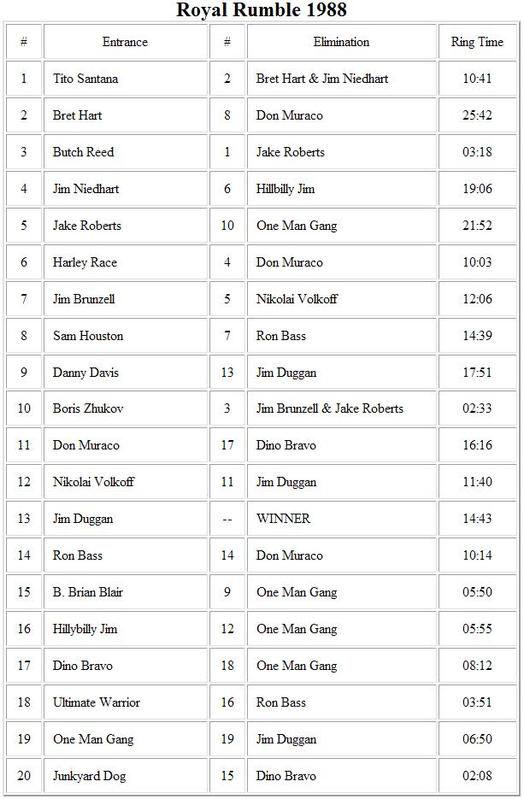 Like I mentioned previously, back in the early days of the Rumble (well, the first 2 years at least), I don”t think Vince gave two sh*ts who won the Rumble. Having Duggan and Studd win made no sense whatsoever. Neither went on to receive a push”strange.
Looking back though, at the little promoted show that I watched on Sky One, its quite unbelievable that this has become the event that kicks off the much ballyhooed “Road to WrestleMania” and is now one of the biggest drawing PPV”s every year.
Next Sunday will be the 21st Royal Rumble, and although its had its up”s (amazing talent filled matches in 1990, 91, 92, great booking) and down”s (time cut to 1 minute and even 45 seconds between entrances in 1995 and 96), it still gets people excited every year and is seen as a very important part of the WWE calendar. Although I barely watch any WWE TV or PPV”s these days, I”ll be watching the Royal Rumble. Maybe WWE will throw in a nice surprise as they do every few years. Come on Hogan, get stuck in there lad!
As Vince used to say: “Its tiiiiime to Rumble, its tiiiime for the ROOOYYYALLLL RUUUMMMMBBLLLE!!!!!!!”