THQ Inc. and JAKKS Pacific,Inc. today announced that six World Wrestling Entertainment luminaries will be featured on the cover of WWE Legends of WrestleMania.  Renowned Superstars Andre the Giant, Hulk Hogan, Stone Cold Steve Austin and The Rock, along with vibrant managers Bobby Heenan and Jimmy Hart, will set the tone for the new videogame property, which is poised to deliver a distinguished roster, arcade style gameplay and historic, vintage presentation.  WWE Legends of WrestleMania is scheduled for release in March 2009 to coincide with WrestleMania 25 in Houston, Texas.

“Andre, Hogan, Austin and The Rock represent the breadth of incredible talent that players can use to relive, rewrite or redefine history in WWE Legends of WrestleMania,” said Cory Ledesma, senior creative manager, THQ.  “In addition, they will have access to dynamic managers, such as Heenan and Hart, who will play important roles throughout critical gameplay moments.” 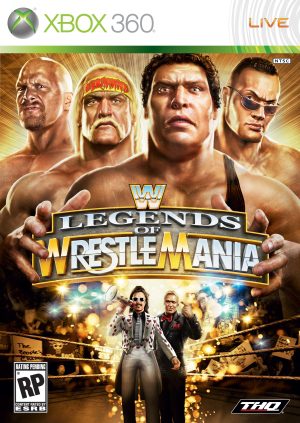 About WWE Legends of WrestleMania
WWE Legends of WrestleMania will embrace the leading sports entertainment organization’s rich history to relive, rewrite or redefine the definitive elements of WWE from the Eighties and Nineties.  Players will experience the entertaining lives of 40 larger-than-life Legends and have control over Legendary Managers, each of whom will play crucial roles in match outcomes.  The game’s new grapple-based fighting system will capture the high-energy action and drama seen in vintage WWE matches, while a historically accurate representation of past WWE telecasts will set the stage, including dynamic visual treatments, signature ring entrances, renowned commentators and notable venues.  WWE Legends of WrestleMania will also include a WrestleMania Tour Mode that allows players to participate in key matches from multiple WrestleMania events, a Create-A-Legend system to develop the Legends of tomorrow, as well as online functionality for players to compete on the biggest stages in WWE history.