Well here it is the second edition of The Worked Shoot but not quite in time for Christmas as planned. It is no virgin birth but it is a miracle of sorts you are now reading this. My PC technically knocked out my near finished draft! So this all had to be rewritten, the plus side being new news and previews has now been added. That will teach me, in future I am backing up my files!

So put your feet up and pour yourself a glass of your favourite Christmas tipple as we take a peek at all the recent MMA action highlights then anticipate the big fights from the world of Mixed Martial Arts coming over Christmas and the New Year.

At last Bobby Lashley made his promised MMA debut on a show titled There Will Be Blood – and blood there was! The former WWE pro wrestling superstar did not hang about in his Mixed Martial Arts debut versus fellow rookie Joshua Franklin. Lashley grounded Franklin, pounding him, opening up the rookie opponent”s forehead, leaving him with a huge gash. The wound was too serious to continue the contest. Over in just 41 seconds Lashley earned his first MMA win in his first fight. This gives the UFC match makers something to consider if they want to book two former WWE wrestlers in a PPV, of course first of all the Zuffa backed brand need to sign him up.

Lashley is likely to next be in MMA action for California based Palace Fighting Championships scheduled for February. His opponent is yet to been announced. Lashley is aiming his sights high so let”s hope 2009 will see him make it as successful as the other successful former WWE star Brock Lesnar.

In action for the second part of the co main event saw Ricco Rodriguez take on Jeff Monson. This was a rematch from UFC 35 with Monson avenging his near-seven-year-old loss to Rodriguez. Three wins in a row for Monson winning with a unanimous decision from the judges, over the former UFC champ.

The event was held at the Crown Coliseum in Fayetteville, North Carolina. Airing live on Spike TV in the US and in aid of the Intrepid Fallen Heroes Fund. Boy what a patriotic event this was with the UFC bookers taking a leaf out of Vince McMahon”s book as Muslim named Razak Al-Hassan took on Steve Cantwell. Steve Cantwell def. Razak Al-Hassan via TKO (armbar) – R1 (4:04) On top of that it was the USA vs Japan for the main event, which saw Josh Koscheck take on Yoshiyuki Yoshida in the middleweight bracket. Koscheck knocked out Yoshida to be declared the winner in round two of the bout.

Here are the rest of the results from the card:

The UFC treated fight fans to a second free to air show on the same week with the season 8 finale of The Ultimate Fighter.

Other action on the card included Wilson Gouveia defeating Jason MacDonald via submission (strikes) in the first round of their contest.
Anthony Johnson and Kevin Burns battled it out with Johnson taking victory with a knockout kick to the head of Burns early on in the third round.

At the top of the card were the two finals from the series. The first being in the Light Heavyweight bracket, which was followed by the Lightweight finalists in action.

Ryan Bader took on Vinicius Magalhaes in Light Heavyweight final defeating him via TKO with strikes in round one.
Last but not least going to the distance saw the Lightweight final as  Efrain Escudero beat Phillipe Nover via unanimous decision.

By the time you read this UFC 92 would have just taken place and although I”m sure most of you would have seen it live there are no spoilers contained here for those of us who have yet to see the show, so please read on if are yet to see the show! So let”s take a look at the three big fights at the top of this huge end of year event.

Forrest Griffin vs. Rashad Evans
This is Forrest Griffin”s first defence of the Light Heavyweight title against Evans at the very top of this stacked pay per view event. If we are being honest Griffin”s titles win was not the very most decisive victory crowning a new champ but he went the distance and got the decision ultimately. This time he needs to prove himself a worthy champion against Evans the man who beat former champion and fan favourite Chuck Liddell. The interesting thing with this pairing being they are both former contestants of The Ultimate Fighter series. Are they worthy of being champions or are they just both very fortunate since being recognisable from their appearances on the popular MMA fighter reality TV series? Of course being standouts of The Ultimate Fighter series should secure box office and pay per view success but only time will tell if they are both truly destined for championship top of the card status.

Prediction: I see this going of two ways ”“  a decision win for Griffin after the full 5 rounds or Evans knocking out Griffin in an early round.

Antonio Rodrigo Nogueira vs. Frank Mir
Originally this match-up would have been for the heavyweight strap but since Randy “The Natural” Couture returned as defending champion and lost to Brock Lesnar the contest determines who faces Lesnar to unify the title. Nogueira as the interim champion versus Mir either one winning sets up an interesting fight for reigning title holder Lesnar. If Mir is the winner it is a rematch for Mir against a now more experienced Lesnar, I say Brock destroys Mir if they fight again no making the same mistakes twice. The fight I want is Nogueira against Lesnar. Lesnar’s wrestling in that fight will put Nog into the position he wants to be, and he will punish Brock if he makes a mistake, it will be awesome. Don”t forget Nogueira has the weathered the storm against another monster back in the orient in the form of The Beast Bob Sapp.

Prediction: Nogueira to tap-out Mir in the 2nd or 3rd round to take it, thus becoming Brock Lesnar”s next opponent and challenger for the heavyweight crown.

Quinton Jackson vs. Wanderlei Silva
The huge question here is whether Rampage Jackson is on top of his game mentally following his breakdown coupled with his arrest that went with it all. Rampage needs to prove himself he has conquered his demons and back on top of things by putting in an impressive performance even if he does not win. We all want Quinton to be back in action and handle a loss well, unlike previously when he lost the belt to Forrest Griffin. Judging by their previous MMA battles for Pride FC Wanderlei had the edge so most likely the outcome is the same?

Prediction: Wanderlei Silva win by TKO in round 3.

Here is how the rest of the card stacks up:

Probably the biggest news of the year in MMA well at least in Japan is the news announced by K1 that Bob Sapp is making his return to Japanese mixed martial arts action one year to the day of his last appearance. Already an event of mammoth proportions the K1 Heros event on New Year”s Eve Fields Dynamite at the Saitama Super Arena in Saitama, Japan, has added freak show appeal as Sapp will face the mysterious Kinniku Mantaro in a mixed martial arts bout. 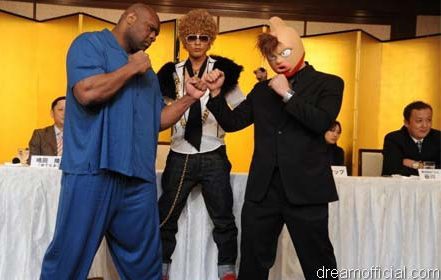 They have surprised us with this one, as Bob “The Beast” Sapp will take on none other than a character from a Japanese anime show. Little is known about Mantaro and even the K-1 announcement contained no information about him. Here is what we do know (From MMAMania.com):

The character in question is “Kinniku Mantaro” from the show “Ultimate Muscle”. Mantaro is known to start matches off slowly and act a bit of a coward in the TV show until his opponent acts dishonourably (as Sapp does from time to time). Then Mantaro gets his inner strength and hulks up or something along those lines.

Now obviously someone”s going to be behind the mask and costume. That person will be Japanese amateur wrestling prospect Akihito Tanaka, so perhaps some skill will be involved and it won”t be a total squash match.

Sapp relies on his size when fighting and not so much technical prowess but in Tanaka”s case how do you out wrestle someone who weighs 350lbs?

Sapp last fought in Japan ”“ also for K-1 ”“ on New Year’s Eve 2007. He was successful then, defeating Bobby Ologun by TKO in the opening round. He has fought in mixed martial arts only one other time since then, losing to fellow K-1 veteran Jan Nortje when Strikeforce took its show on the road to Tacoma, Wash.

The NFL player Sapp has had a huge career in Japan fighting for Pride – MMA and K-1 in kickboxing. He hasn’t had as much popularity in his recent career, but his return to K-1 in mid-2007 marked the end of a year-and-a-half period of inactivity for Sapp after he and the promotion had a falling out over contractual issues. 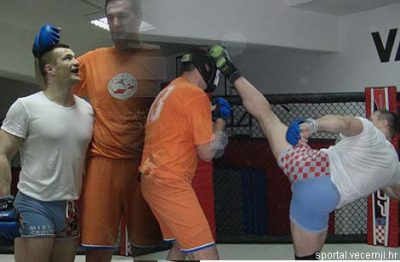 And if that announcement was not enough and you wanted more, then maybe Mirko “Cro Cop” Filipovic vs. 7”² 2″ “Techno Goliath” Hong Man-Choi will since it”s now officially confirmed by FEG.

Now who can forget the third big showdown between two Japanese legends – Kazushi Sakuraba and Kiyoshi Tamura. Hugely popular Sakuraba became a national hero and was considered the last pro wrestler that could fight worth a damn, the last remnant of a lineage going back to Frank Gotch, and trained in Catch Wrestling by Britain”s own Billy Robinson. Despite all of his accomplishments Tamura was considered nothing. Their rivalry goes back ten years to when they both competed as wrestlers. Sakuraba has been successful earning huge winnings in Pride taking on the best of Brazil namely the Gracie clan, garnering the moniker Gracie Hunter. So some say it is more about Tamura wanting to get paid a ton of money and being jealous of Sakuraba”s success in the combat sports world. Tamura has always been jealous of Sakuraba, since back in the UWF, he was the star and Saku was the young boy. There seems to be lots of bitter feelings surrounding this encounter.

Fields Dynamite!! The New Year”s Eve super-show featuring a delightful buffet of fighters under the umbrella of FEG coming together on one night promising to entertain with some damn fine scraps. The show boasts a whole array of participants from DREAM, K-1, K-1 MAX and K-1 Koshien, Fields Dynamite!! So look forward to seeing these wide variety of fighting styles and compelling match-ups, and could feature as many as 20 fights. Only in Japan and on one night only!

The rest of the card for this explosive New Year”s Eve mega event:

Bravo2 have picked up the M1 Challenge, which was recently shown on ITV4. This features teams of MMA fighters from different countries competing around the globe. Look out for this in the New Year on Virgin Media and Sky.

That”s it for now, all be well and no IT mishaps The Worked Shoot returns in the New Year on Sunday 11th of January, until then enjoy the rest of the Christmas holidays and have a Happy New Year fight fans!