Over the past couple years television has seen the emergence of ‘The Reality Show’ these shows showcase the real life antics of individual’s performance and give the audience the opportunity to vote for their performance. This gives the audience the impression that they have control over what they are watching and that they make the decisions on aspects of the show. Reality is defined as, “the state or quality of being real”, and there is nothing more real than the Wrestling business.

The majority of wrestling fans are self-absorbed with insider industry antics; very proud in the knowledge that they have a profound understanding of the business and actively frequent news websites to keep themselves in the loop (we’ve all done it). Although the WWE hate that this is the case, I believe this truly isn’t necessarily as big thing, from an outsiders point of view, I can’t help thinking how underutilized this resource actually is. Wrestling fans these days are, as the term goes ‘smart’ to the business, and although many attribute the demise of the mystique of the industry down to the internet, I think it’s very much being underused as a prime use of resourcefulness on many companies behalf. 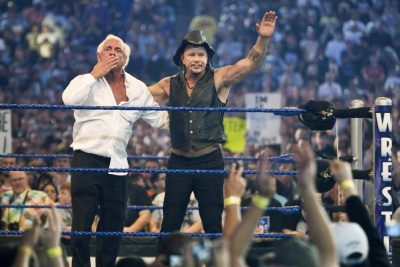 I’ve been analysing the recent use of Mickey Rourke at Wrestlemania, and whether all the work and all the effort of the WWE and Rourke’s party was worth it. I cannot understand the purpose behind using him as he didn’t increase business or add any additional interest in to the show (bar a couple of measly media appearances). An angle that has such potential turned out to be a catastrophic disappointment by WWE standards, especially since The Undertaker and Shawn Michaels had much more of a selling point. Wrestlemania is always going to garner excellent buy rates and be a complete sell-out due to the show being the ‘Grand Slam’ of the Wrestling Industry, and for me trying to use an actor based on a character he was portraying in the movie was a clutch of ignorance on the WWE’s behalf. The WWE have their own celebrity within – why not use these individuals to push the product forward?

Previously Vince McMahon has had to utilise the celebrity to entice the audience in to watching his product, and after he’s got them to watch, he hooks them with the spectacle of the show that can be mirrored by no other company or show on our planet.  The age and time that we are living today, Vince McMahon no longer needs to do this, as he has his very own group of Wrestlers that have more of a celebrity status than most over-the-hill has-been celebrities (not saying Rourke is, however this thought was motioned by media-moment individuals such as K-Fed). If anything, the celebrity gains more from their experience in the WWE world then the other way round, as it’s a worldwide brand and not primarily limited to the US – maybe Vince McMahon should charge them for the publicity and barter a greater deal with their Hollywood agents!
There have been times in the past when the WWE have gained public image from the use of the celebrity. In the eighties, the WWF’s popularity was largely due to the use of celebrities and building the intrigue into the show that made the audience reach out and buy Pay per views. Once the audience were hooked on their original attraction of their favourite celebrity controversially conversing with these Wrestlers, they had to buy the show or attend and thus the Wrestlers received the celebrity rub.

I believe that the reality TV era that we are living in at the moment, give the WWE excellent scope to source out new stars and put them in the spotlight and give them much needed publicity before being promoted to the main roster. I think a TV show that incorporated the reality element of being a wrestler, with a similar format as an ‘American Idol’ idol show, would give the public a broader view of the dedication and sometimes complete madness that these great athletes have to go through to become what they become. Following stints on the current batch of reality shows, individuals have received unbelievable response from the audience and following this they get a re-emersion of their career or the elevation into the spotlight with much public support as audiences can identify with the character. Why could it not work for Wrestling?
In the past WWE has learnt from trends on television, and that once these trends have been identified then they should be pushed as per the ‘attitude’ era of the 90’s– the only problem at the WWE is that sometimes the creative team have grown with the complete ethos of a certain method of entertainment that worked in yesteryear with a one dimensional view, regardless as to whether it works today. I believe ‘Tough enough’ was a good programme and it wasn’t as exclusive as it could have been. There wasn’t enough audience interaction, and I believe that was the reason for its downfall as well as the decrease in audience figures, which was related to the previous point made. Get people interested in your product – get them involved please.

In order to drive their product forward WWE should establish some ground rules for creative writing relating to their shows that incorporate the use of storylines on the web and real-life scenarios. They shouldn’t ignore the fact that the internet based fans are powerful components of their audience base and should deliver storylines where the wrestlers can actually show real emotions based on misgivings and character interpretations from past interviews and scenarios that have occurred previously in their careers. Gone are the days when a wooden wrestler with zero personality attempts to cut a promotional interview in order to hype their storyline – show me some real emotion and I’m sure the figures will show you some real increase in viewership level.