This will probably end up being my ‘format’ for these blogs, meaning that I will probably post one every other day.
I read about Cena’s appearance at an Indy promotion in a high school gym in Massachusetts where Vince McMahon also appeared and Cena F-U’ed the ECW World Champion. That’s all well and good, however, it praises Cena and McMahon like they’re some sort of Gods for appearing at the show, signing some autographs and kissing some babies. I mean, of course he’s going to get a big ovation in his home state of Massachusetts and sign some autographs. 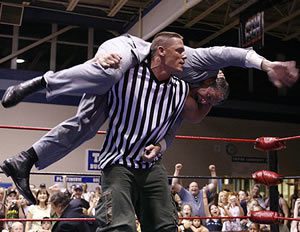 From what I’ve read over the last few months, you would think Cena and Vince are soulmates. I’m not saying it’s a bad thing for a wrestler to be close the guy running the show, but in this case, his relationship with McMahon overshadows his poor promo and wrestling skills (or lack there-of). Are there worse wrestlers than Cena in the WWE? Yes, in fact he’s feuding with one now, but I still don’t like Cena. I never have and I never will.
Now another thing that sends me into a rant, is the upcoming Saturday Night’s Main Event (June 2’nd on NBC). I read and heard that the WWE didn’t want to air this show, but come on, an 11:30/10:30c timeslot? That is ridiculous. I understand that SNME didn’t do so hot the last couple of times it aired, but this is going to bomb worse than those. Those were live, prime-time specials and now they got this taped catastrophe on June 2’nd. What is the WWE trying to prove?
On a side-note, I am a huge fan of Edge as the World Heavyweight Champion. I’ve really always been a fan of his. He’s a good wrestler, he cuts good promos and he generates such heel heat. Granted, I’m also a big fan of Mr. Kennedy for the same reasons. So as you would assume, I am stoked (yes, I said stoked) for the imminent Edge/Kennedy feud.
This is going to be a good summer in the world of the WWE (hopefully). I mean you got an upcoming Edge/Kennedy feud and the return of Triple H, as well as Hardcore Holly and Rey Mysterio. But, the summer is also looking bad for WWE on the injury front. Some of the top talent are out of action for at least 6 months. Guys like Shawn Michaels and the Undertake. It’s kind of weird how Triple H will be returning from injury around the same time Michaels goes down with an injury.
Well, that’s all I got for now. My next blog will more than likely include a preview for One Night Stand and if you’re not down with that, I got two words for ya”

One reply on “CBlog III”

Newsflash: The Cena hate was killed in January of this year when Cena had not one but TWO MOTY contenders with Umaga, followed by two MOTY contenders with Shawn Michaels in April, and a shockingly enjoyable and old school match with the Great Khali.
Poor promo skills? Hardly. Bad ability? In terms of psychology and making an audience care, Cena is THE single greatest big-match worker in the world right now. 24 months of great matches with such a variety of opponents doesn’t make a good argument for Cena bashers.
Oh, and “of course he”™s going to get a big ovation in his home state of Massachusetts.” I love the selective memories of people who seem to be under the illusion that Cena has never received a good reaction in his life, when in fact he gets strong reactions in at least half of all the areas that the WWE visits.