WrestleMania VII provided one of the most memorable moments in WrestleMania history, and it all stemmed from a retirement match. Randy Savage and the Ultimate Warrior had been feuding for some time, with Savage costing Warrior the WWF Title to Sgt. Slaughter two months beforehand. Savage was going under the name of The Macho King and was managed by Queen Sherri, a far cry to his days of the Macho Man with Elizabeth by his side. But suspicions were aroused when Miss Elizabeth was sat in the front row for the show, and following Warrior’s victory, meaning Savage was forced to retire, things started getting interesting. Sherri began verbally, and then physically attacking Savage in the ring, berating him for losing in this huge match. But soon Elizabeth could take no more, and she jumped the barrier and headed to the ring, grabbing Sherri and throwing her from the ring. An awkward moment followed, as Savage required confirmation that it had been Sherri attacking him and not Elizabeth. But soon the two embraced in the centre of the ring to a huge ovation from those in attendance, and as they left the ring together for the last time, Savage held the ropes open for Elizabeth to climb through in the same manner she had done for him for a number of years. Truly one of the most emotional moments of WrestleMania, and certainly one I will always remember as being the end of an era. 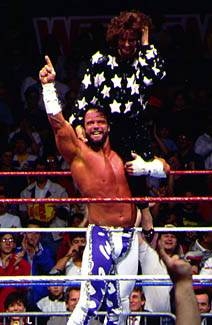 My second “entire show” choice comes in the form of WrestleMania X7. This was the first PPV to be held following WWF’s purchase of WCW, and what a show it was. Every match on the card, with the possible exception of Chyna vs. Ivory, delivered either far beyond the expectations of those watching, or matched the incredible hype it had been given. TLC II surpassed the already dizzying heights of the first match, and who can forget Edge Spearing Jeff Hardy from 10 feet in the air? Kurt Angle and Chris Benoit put on a technical wrestling classic widely considered one of the best in WrestleMania history. The gimmick battle royal was great fun for any long time wrestling fan. Shane and Vince McMahon put on a match so full of drama, suspense and twists that the fact they weren’t wrestlers didn’t even cross anyone’s mind. Am I done? No way! The Undertaker and Triple H had a great, no nonsense brawl, Eddie Guerrero carried Test to a far better match than was expected, and William Regal and Chris Jericho tangled in a good, if unspectacular match. Jim Ross and Paul Heyman provided superb commentary throughout the whole show. And of course, the show culminated with a huge Main Event, as Stone Cold Steve Austin and The Rock had a hell of a match, which ended with the aforementioned Austin heel turn. This show is widely considered to be the best wrestling event of all time, and certainly can’t be topped for a show held in the USA (which takes Canadian Stampede out of the running!). If you haven’t watched this WrestleMania… well, watch it. And if you have, watch it again.

#8 – Hogan passes the torch to the Warrior – WrestleMania VI

I’ll be honest; I’ve never seen the whole match between Warrior and Hogan at WrestleMania VI. In my defence, I was only three went it took place, and it’s a match I’ve never been able to see in its entirety. But I’m fully aware of the implications this one match had in the history of the WWF. Hogan had ruled the roost in the WWF for over six years, and with his increased mainstream celebrity status, there needed to be a new force to be reckoned with. Enter the Ultimate Warrior, whose energy and excitement had made him into a huge star as well. They collided at WrestleMania VI in Toronto, and Warrior shocked the world when he was able to pin Hogan down for a three count to win the match and capture the WWF title. But the memorable moment came after the match, as Hogan took the belt into the ring and presented it to the Warrior, before holding up Warrior’s arm to declare him the winner. The torch had been officially passed, even if Hogan was fighting for the WWF Title again the next WrestleMania. And then winning the WWF title in 30 seconds at WrestleMania IX. But ignore those parts. 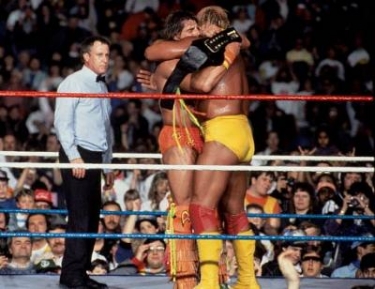 The death of Eddie Guerrero in late 2005 cast a huge shadow over the wrestling industry, as it lost one of the most entertaining men to have ever set foot in the ring. Whilst the WWE made some bizarre decisions regarding Eddie’s legacy, many of which insulted and horrified even the most loyal of fans, one of the more emotional stories that came about was Rey Mysterio’s sudden push. For it to work you had to forget the last year of action that saw Eddie make Rey’s life a living hell by claiming that Rey’s son Dominik was, in fact, Eddie’s son. You had to remember that Eddie and Rey were best friends, and Rey reminded us of this by dedicating each match to Eddie’s memory. And there were some big matches, as Rey won the 2006 Royal Rumble match after entering at #2, and despite losing his WrestleMania title shot to Randy Orton, he got it back as Teddy Long felt sorry for him. Hardly the most character building of storylines, and when WrestleMania 22 came around, most fans saw Rey Mysterio as an afterthought, only in the match because of his connection to Eddie, and highly unlikely to win the title. But Rey was able to score a highly unlikely victory over Kurt Angle and Randy Orton, and straight away you’ve got yourself a moment to remember. Sure, the match was under 10 minutes because HHH vs. Cena was deemed more important, and sure, Rey’s celebration was cut short as they had to change the ring over to accommodate a Playboy pillow fight, but if you ignore all the mistakes at the core you find what WrestleMania is all about. Rey Mysterio, a man considered never good enough based on his size, accomplished all of his dreams in one night by becoming World Champion. And what’s more, he did it in the name of his best friend, believing that Eddie would be looking down on him with pride.

WrestleMania XII is widely remembered for just one match. Shawn Michaels took on Bret Hart in a 60 Minute Ironman match, with the winner being decided by the most pinfalls or submissions in that hour, and the WWF Title was at stake. This remains the longest match in WrestleMania history and possibly the one match that divides wrestling fans everywhere, some find it a technical masterpiece, and others find it boring and difficult to watch due to its length. But before the match even began, it provided us with a WrestleMania moment that cannot be forgotten. When Shawn Michaels’ music hit everyone turned to the entranceway to await the Heartbreak Kid’s arrival. But instead, Jose Lothario appeared there, causing much confusion to the watching fans. Lothario walked to the ring, climbed the turnbuckle and pointed to the roof. The fans confusion was soon put to rest as Michaels appeared at the top of the arena and zip-lined his way down to the ring in the ultimate act of showmanship and flamboyance. The crowd went wild as their hero continued his long aerial ride to the ring, and it set the tone for what would truly be a memorable contest. In recent years the WWE have tried to tap into a similar vein for their main event matches, who can forget Triple H dressed as Conan The Barbarian, JBL dropping specially-made JBL dollar bills from the roof, John Cena dressed as a Chicago gangster, or speeding into the arena in a Corvette through a plate glass window. But no matter how hard they try, or how much money they throw at a wrestler’s entrance, it is unlikely they will ever be able to beat the thrill and excitement of HBK’s entrance at WrestleMania 12. 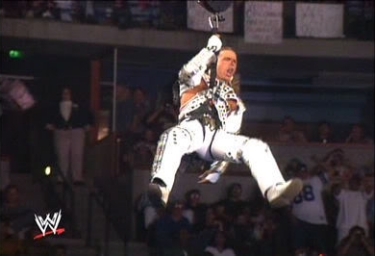